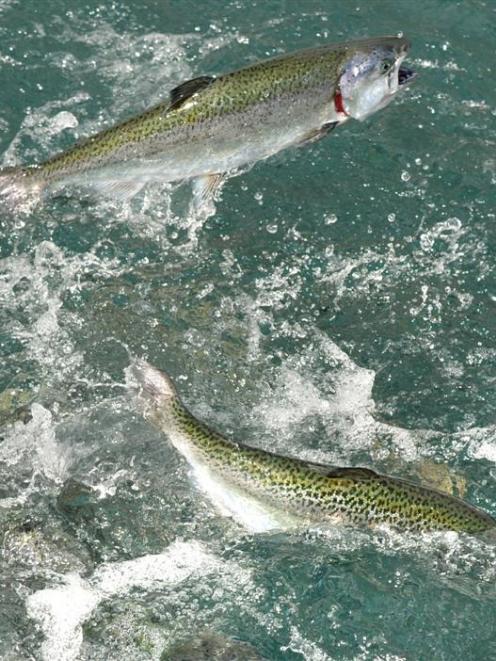 Salmon ready for harvest in Mt Cook Alpine Salmon's Ohau A canal salmon farm. Photo by Stephen Jaquiery.
''Greedy'' salmon anglers threatening to turn a salmon bonanza in the Waitaki hydro canals into a free-for-all are being accused of ignoring catch limits and using illegal methods to catch easy prey.

Following the release of 36,000 salmon smolt from the Mt Cook Alpine Salmon hatchery at Ohau 18 months ago, anglers have reported being able to hook a fish on every cast at some spots on the Tekapo and Ohau canals.

Mr Hughes said since December, 18 offence notices had been handed out to anglers on the Pukaki and Tekapo canals.

He said most of the offence notices were issued for fishing without a licence, but there had also been a lot of instances of people using ''the wrong bait and wrong methods''.

Ohau A in particular, was a ''hot-spot'' for landing fish, he said.

''There appears to be one heck of a lot of fish being caught.

''People hear about these easy fish and they go up there with the wrong type of gear.''

However, he said, the situation had resulted in shouting matches and ''unpleasant situations'', when rule-breakers had been confronted by law-abiding anglers fishing on the same stretches of water.

As a result, Fish and Game would have rangers patrolling the canals to make sure people were ''playing the game'', he said.

Mt Cook Alpine Salmon chief executive Geoff Matthews said the release of salmon was part of the fishery's commitment to the community and environment, and although regular releases to restock local lakes and rivers would continue, he urged anglers to obey the law.

''There is enough for everyone to go round,'' he said.