By Ruby Heyward
0 Comments
If you need to settle a Victorian-era argument, some tea and biscuits does the trick.

That is the Steampunk way, so says the arbiter of such matters.

Yesterday, the annual tea duelling contest was held as part of the Steampunk NZ Festival 2021, in Oamaru.

At the helm of the duels was Colonel Sir Julius Hawthorne (known as Leslie Craven on a regular day), who said that was how disputes were settled in the Steampunk world.

From who wore red better, to who sported the better hat — these matters were what two of the day’s six challenges sought to settle, once and for all.

Sir Hawthorne and his wife, Mrs Hudson "the younger" (known as Jane Craven on her birth certificate), ventured down from Wellington each year to host the duelling. 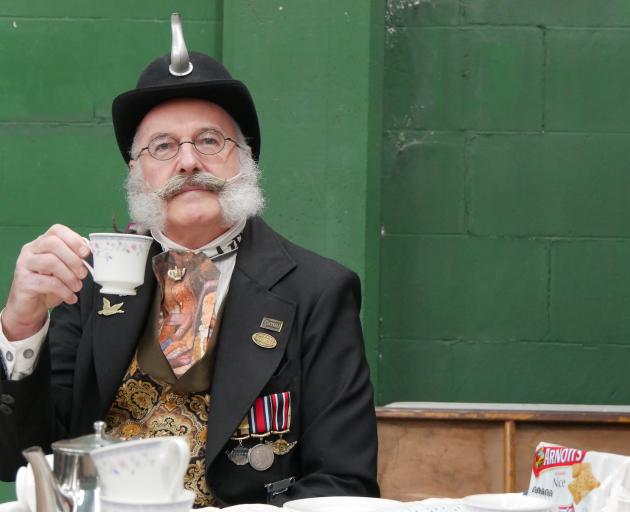 When it comes to tea duelling, the contest’s ‘‘tiffin’’ Colonel Sir Julius Hawthorne does not mess around, and it was no different for this year’s Steampunk NZ Festival 2021 in Oamaru. PHOTO: RUBY HEYWARD
And as the duels’ "tiffin" it was Sir Hawthorne’s job to judge and host the contest.

Two disputants would emerge from the crowd, choose biscuits, dunk them in freshly poured tea for a clean five seconds, then race each other to consume their biscuit without it collapsing in their grasp.

Black tea was the way to go, though green tea was "almost acceptable", and herbal tea frowned upon, he said.

As for the "weapon of choice", Arnott’s Nice biscuits were the go-to, and those, or gingernuts, stood in for the more traditional duelling swords or pistols.

Chocolate biscuits were forbidden. It stated so in the comprehensive rules list established in the United Kingdom, under the Articles of the Honourable Association of Tea Duellists, Third Edition 1899, Sir Hawthorne said.

Although it sounded deathly serious, the duelling and nature of steampunk itself were anything but.

"If you are taking it too seriously, you are not doing it right," Sir Hawthorne chuckled.

Today was the last day of the four-day festival that began on Friday, attracting enthusiasts from all over New Zealand.