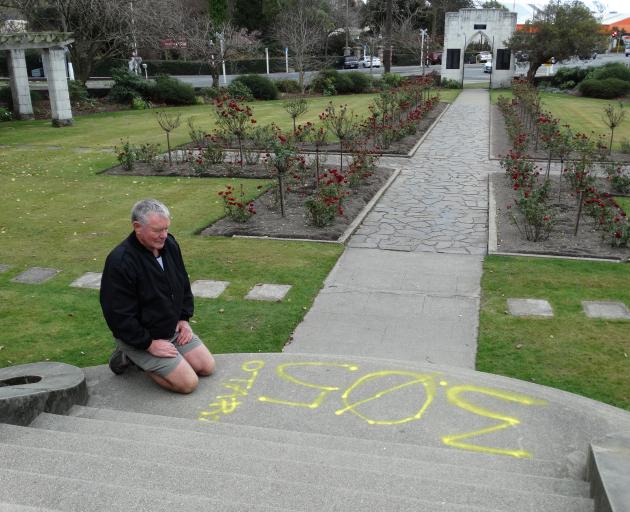 The yellow graffiti, believed by Oamaru police to have been painted over the weekend, was discovered by Mr Beveridge as he walked through the North Otago Returned and Services Association Garden of Memories on the corner of Severn St and Itchen St yesterday.

A phallic symbol was sprayed on a stone fence nearby.

Mr Beveridge, who has for many years been heavily involved in commemorative services held at the memorial, was angered by the act, which he said was ''pure disrespect''.

''It's a special place for the families of the soldiers ... and the community.

''If one really looks at it, soldiers really fought to give people the freedom to do things, but I'm quite sure they did not think this was going to be part of it. Those that are responsible need to think of the hurt they are causing to the families of the soldiers that have gone before.''

Sergeant Blair Wilkinson, of Oamaru, said graffiti was not a widespread problem in the town.

''Compared to other towns, Oamaru is relatively graffiti-free, which is something not only police, but the wider community, can take pride in.

''For it to happen at the Garden of Memories ... is very concerning.''

He asked anyone with information to visit the Oamaru station, call 105 or contact Crimestoppers anonymously on 0800 555 111.

Mr Derek Beveridge with respect they have 'hurt' all those who have served, are currently serving and those who have family serving or have served New Zealand. Whoever has done this needs to be found, named and shamed, if underage their parents need to be held accountable for their actions. As an ex Serving member of the NZDF, I am disgusted that things like this happen and those who have done such things usually nothing happens to them and the excuse of 'they come from a under privileged back ground is the coined phase'