Ink links artists who bonded over love of art 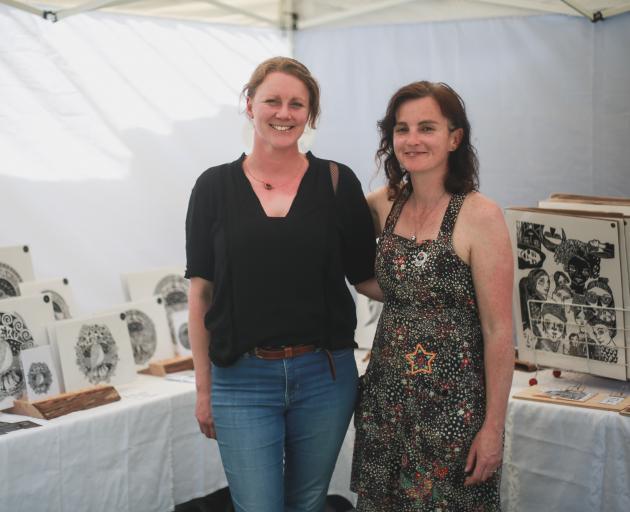 The difference between the two artists' styles is in the application - Mrs Vickers-Anderson specialises in pen-style drawings, while Mrs Carpenter works mostly in lino prints.

The Herbert and Kakanui artists, who were among the 80 boutique stallholders at Waimate's Centrewood Fete on Saturday, met through their children, who attended the same kindergarten, and they bonded over a passion for art.

They had moved to rural North Otago around the same time and had both taken a break from art to have children.

"To find someone else who inspires you, who is interested in exhibiting, it's just really nice," Mrs Carpenter said.

Mrs Vickers-Anderson and Mrs Carpenter sell at markets together and are in the early stages of planning an exhibition.

Neither see their art as work - it is their passion and a social activity.

"It's just getting out there and social for us," Mrs Vickers-Anderson said.

At markets, Mrs Vickers-Anderson showcases her ink pen-style drawings, but her real passion is in upholstery and furnishings.

She moved to North Otago in 2011 with her husband Jason, whom she met while working as a truck driver in the Western Australian mining town of Kalgoorlie.

Her studio is in an old worker's cottage on their Herbert farm, built in the 1860s.

Mrs Carpenter, who has a studio in the garage of her Kakanui home, never thought she would be able to do print work outside art school.

"Printmaking was always my interest, and I just didn't think that I could do it outside of art school because it's such a technical process and it requires a lot of equipment.

"I didn't really see that it was viable until I found an old clothes mangle in an op shop in Hampden and I converted that into a printing press."

About 800 people attended the eighth, and last, Centrewood Fete on Saturday.

While it was the last Centrewood Fete in its current form, plans were afoot for other events in the gardens that surround the 123-year-old French-designed homestead.

"It won't be the last event ... watch this space," Mrs Sutherland said.