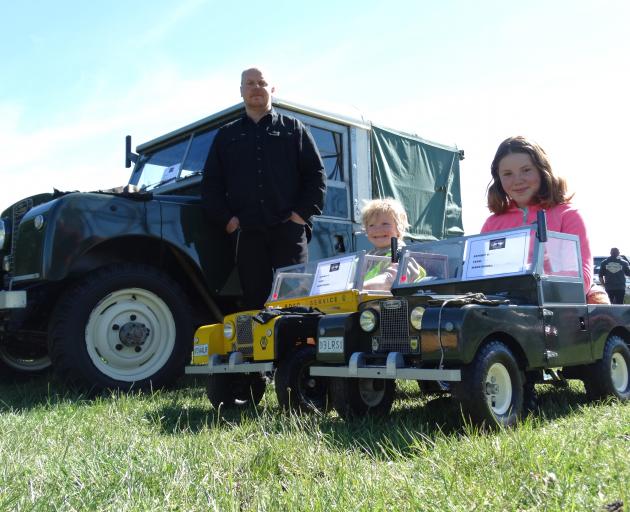 Oamaru man Ross Hayes shows off his home-built 1954 Land Rover Series 1 and the pedal car versions he built for his children Dylan (4) and Abby (12). The vehicles were displayed at the Kurow Kruisers Show Us Your Toys car exhibition and family day at Kurow Racecourse on Saturday. PHOTO: DANIEL BIRCHFIELD
Oamaru's Ross Hayes reckons he may have got slightly carried away with his fascination for Land Rovers.

However, ask his children and they will tell you otherwise.

Mr Hayes displayed his home-built 1954 Land Rover Series 1 at the Kurow Kruisers Show Us Your Toys car exhibition and family day at Kurow Racecourse on Saturday, alongside two smaller versions of the same model.

he built the pint-sized pedal car versions of his Land Rover, affectionately named ``Little Miss'' and ``Mini Master'', for his two children, Abby and Dylan.

Much like Abby and Dylan, Mr Hayes adored Land Rovers when he was young.

"My family are into Land Rovers. I have been all of my life. My uncle's wee Series 1 especially got me interested in them.''

At the age of 18, he set about building his own version - a job that took more than five years.

"I stripped to an absolute bare chassis and 6000 hours later, when I was 23, it was finished. Every nut, bolt and screw and it was done.''

A mechanical engineer by trade, he imported all of the parts he was unable to source locally or fabricate himself, mostly from the United Kingdom.

Mr Hayes is obviously proud of his vehicle and enjoyed displaying it at car shows and exhibitions far and wide.

"It's a nice truck and really turns head. It also drives well, actually.''

As far as the miniature versions go, in shades of green and yellow, they each took about 400 hours to build.

There are based on stories Mr Ross would make up and tell his children at bedtime.

"It was just one of those things I reckon I always wanted to do for our kids. I guess I get a bit carried away sometimes.''

Abby said she loved showing her Land Rover as much as her father did.

"They are seriously cool. My favourite thing about showing them is seeing the smiles that come to people's faces when they see them. You are just about making someone's day. Some of the kids love just sitting in them.''

Several hundred people enjoyed the day, which featured dozens of classic and modern vehicles as well as an plenty of family entertainment including lawn mower races and pony rides.