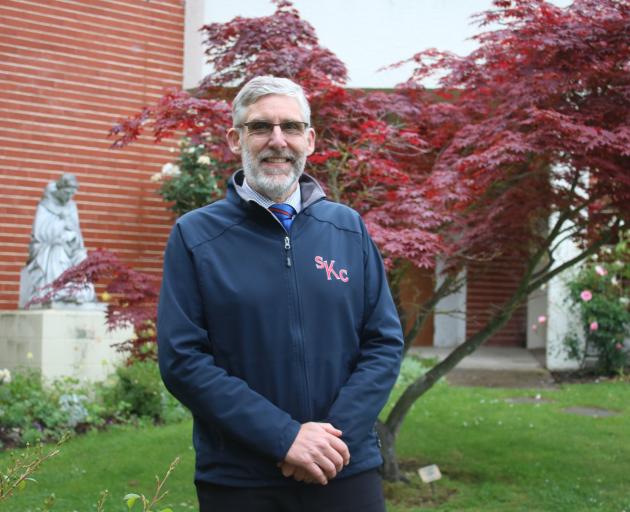 Outgoing St Kevin’s College principal Paul Olsen is looking forward to sharing his knowledge with a new group of people, taking up a job as the manager of the Catholic Education office for the Dunedin Diocese. PHOTO: KAYLA HODGE
It was the skirl of the bagpipes that led to a life of teaching for the departing principal of St Kevin’s College .

As a pupil at Dunedin’s St Paul’s High School — now Kavanagh College — Paul Olsen tutored other young pipers and his friends often told him he would make a good teacher.

"I’ve always had a passion for sharing my knowledge," he said.

Mr Olsen’s teaching career started in 1985 at Gore’s St Peter’s College, where he was a science teacher and then the head of science.

He moved to Waitaki Boys’ High School in 1995 as the head of science and then senior master, before heading to St Kevin’s as deputy principal in 2000.

In 2007, Mr Olsen moved to Invercargill’s Verdon College as principal and returned to lead St Kevin’s in 2010.

After 11 years as principal at the school, he will be passing on his knowledge in a different way, becoming manager of the Catholic Education office for the Dunedin Diocese next year.

Leaving at the end of this term, Mr Olsen (59) said he felt a mixture of sadness and anticipation.

"As you can imagine, when you’ve committed so much of your life to the school, it twinges at your heart," Mr Olsen said.

However, he looked forward to supporting 22 Catholic schools from Waitaki to Invercargill and mentoring a new group of people, and he felt his involvement in the Whitestone Community of Learning set him up well to assist at all school levels.

"I think also you want the best for each of the schools. For me, I’m passionate about Catholic education and wanting to see that it prospers so here’s an opportunity to be able to give back to an organisation."

When Mr Olsen started as deputy principal in 2000, St Kevin’s had "a real family feel to it". That was something he had carried through when he returned as principal in 2010.

"The thing that I thought was really important here was to be able to know every student and be able to support them in a genuine way and not be lost.

"Most importantly it’s been about the culture of the place, bringing our values to the fore ... creating a family environment and also creating really high expectations of students.

"I think that’s really a key factor to improving the results."

Through the years there had been plenty of development work, new equestrian facilities, new courses and strong international offerings.

He had witnessed the school’s ownership change from Christian Brothers to the Catholic Diocese of Dunedin in 2019, too.

St Kevin’s also offered sessions where senior pupils took alternative courses, gaining career and life experience as not all pupils would go on to study.

"There’s been a lot of work in that area and just making sure the pathways through into employment are personalised rather than just one size fits all."

He also recognised the diversity in sports offered, and said St Kevin’s "punched above our weight in many of the sporting endeavours".

While Mr Olsen’s involvement was noticeable, he said it would never have been possible without the 36 teaching staff who shared the school’s vision.

"If the place looks good it’s one thing attributing that to my leadership but I believe that it’s actually having a staff who are heavily committed — that’s really quite positive."

Assistant principal Jo Walshe, who will take over from Mr Olsen next year, had been "shadowing" him for the past few months for a smooth transition.

"I have to say it’s reassuring that the work from your staff is going to be carried on in such capable hands," Mr Olsen said.

"I genuinely feel now that I’m leaving it in good hands."

While his new role was in Dunedin, he would still live in Oamaru, as he loved the "inspiring" outdoors and the welcoming community, and was the Waitaki District Schools Pipe Band president.

He was grateful for the support he had received from the community, in his role as principal, through the years.

"It’s one thing having a dedicated staff, it’s one thing being a strong leader but you need a community who will also buy into your vision and support you in this endeavour.

"I feel have as if I have a really supportive community who trust me with their young people and trust the vision we have."