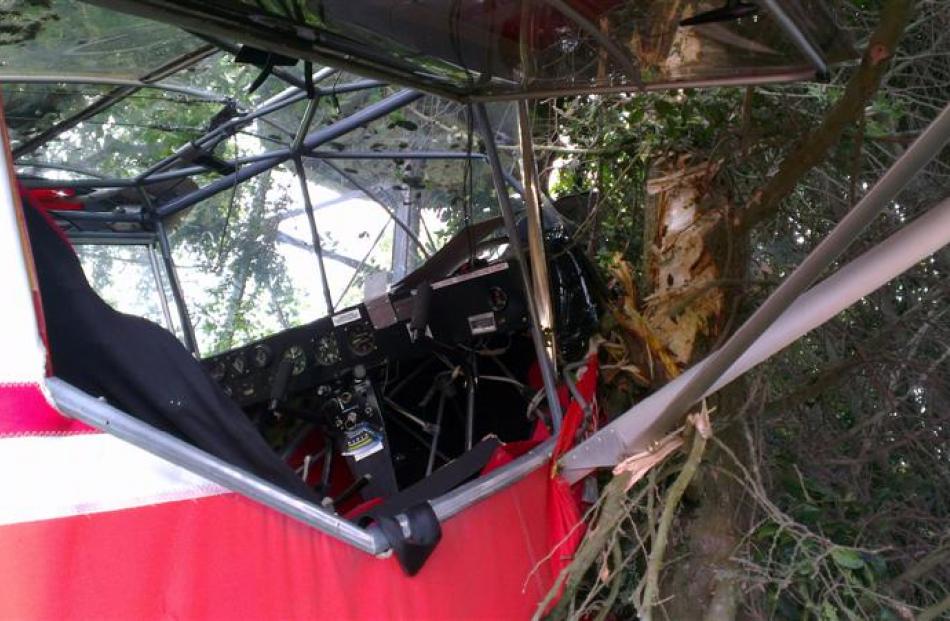 The cockpit of the microlight after the crash. Photos by David Bruce. 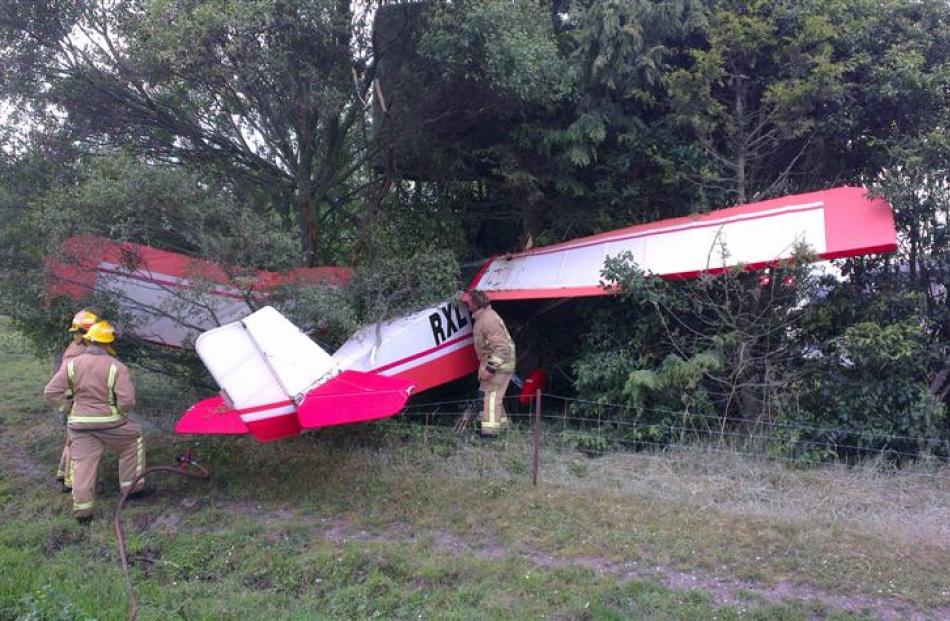 Emergency services keep a watch on fuel leaking from the microlight that crashed into trees at Hilderthorpe, North Otago, on Saturday.

A plane crash was something a Hilderthorpe woman never had to handle when she was a police officer, but she can now tick it off her list.

A home-built microlight aircraft being flown by Colin Hay (72), of Waimate, crashed into a hedge just metres from her and her partner's house on a dairy farm in Macdonalds Rd on Saturday afternoon.

After being initially treated at the crash site, Mr Hay was taken to Oamaru Hospital with minor to moderate injuries, including a bad laceration to his knee and lacerations and bruising from the safety belt.

He will remain in hospital for a couple of days of observation, a hospital spokesman said yesterday.

The woman, a former North Island police officer who did not want to be named, had been to plenty of road crashes, but never a plane crash.

She was just leaving to help with the milking. As she was walking out the door, she heard ''an almighty crash, a loud bang''.

She leapt on her four-wheel bike and went down the drive and looked up and down Macdonalds Rd, but saw nothing. As she turned back to go to the milking shed, she saw the tail end of a plane sticking out of the trees.

She phoned police at 2.25pm and told them to turn out all the emergency services.

The police, two fire units from Glenavy, a fire unit from Oamaru and an ambulance attended.

In the meantime, she went to check on the pilot and found him sitting in the cockpit and conscious. He told her he was not hurt but could not get out because there was a fuel leak and he had his finger in the hole in the fuel line. She broke off a twig to use as a bung.

With the fuel leak blocked, Mr Hay wanted to get out, but the woman insisted that unless there was ''a dire emergency'', he stay where he was until emergency services arrived.

''I could see his knee was bleeding and I didn't know what other serious injuries he may have had,'' she said.

She then went to meet emergency services and directed them to the site because the plane was difficult to see.

Mr Hay is a well-known and experienced pilot at the North Otago Aero Club, where he stores his microlight. Senior Constable Carl Pedersen, of Oamaru, said the plane had taken off from Oamaru airport.

Mr Hay told police that while flying over the Hilderthorpe area, the microlight had an unexpected loss of power.

In trying to land, he crashed into the shelter belt, Const Pedersen said.

The Civil Aviation Authority has been notified. Mr Hay did not want to talk to the Otago Daily Times.