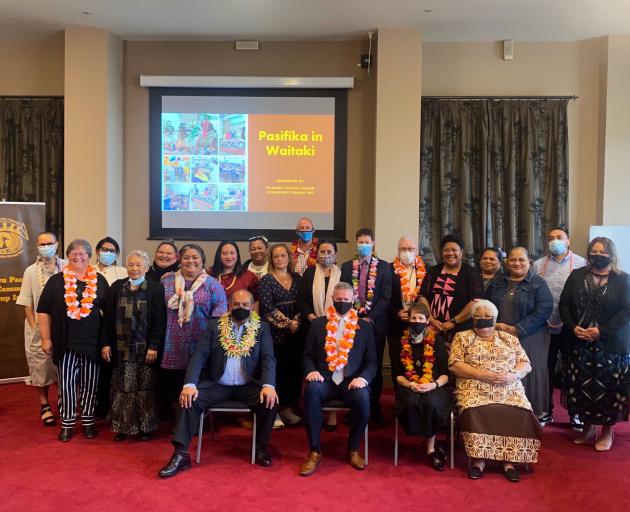 Representatives from the Oamaru Pacific Island Community Group, the Waitaki District Council and Waitaki District Health Services met Minister for Pacific Peoples and Associate Health Minister Aupito William Sio (front left) in Oamaru on Friday. PHOTO: REBECCA RYAN
While a lot of emphasis is placed on Auckland’s Pasifika population, because of its overall size, Oamaru’s is growing at a faster rate.

On Friday, representatives from the Oamaru Pacific Island Community Group, the Waitaki District Council and Waitaki District Health Services gathered together to raise their concerns and aspirations for Pasifika health outcomes with Minister for Pacific Peoples and Associate Health Minister Aupito William Sio, who was visiting Oamaru.

A lot of the issues Pacific people around the country faced were similar, but context was important, and Mr Sio said his visit to Oamaru confirmed the need for investment in Pasifika services for Waitaki’s youthful and fast-growing community.

"This is the future workforce to support the ageing population," he said.

"We’ve got to make sure that we’re upskilling them and providing them with leadership skills."

With the coming reform of the health and disability system, it was also important for the Government to get a sense of the vision and aspiration of regional New Zealand, and to address inequities, he said.

It gave him a "high degree of confidence" to see the Oamaru community come together with a united view about healthcare in the district, he said.

"And we need to be supporting their vision for better healthcare and making sure that their healthcare needs are being addressed."

Mr Sio heaped praise on the Oamaru Pacific Island Community Group and, in particular, manager Hana Halalele, for showing leadership in the rollout of the Covid-19 vaccine.

As of last week, 90% of the eligible Pasifika population in New Zealand have had at least one dose.

Mrs Halalele said the community group had been advocating for additional resourcing and opportunities to help support overall community wellbeing and positive outcomes for the community.

"It was just a heads-up for [Mr Sio] to hear ‘this is what our needs are, and our goals and our aspirations for the community’ and what ways could he, with his different portfolios, help with giving us some visibility with other ministries up in Wellington and continuing to support the work we’re doing locally," she said.

"We had a lot of health leaders in the room, so the minister could see that we’re a united front and that we collaborate and work together."

Discussions about health outcomes often focused on the medical model, but Mrs Halalele said it was important to look at all components of health and wellbeing, such as education, employment and housing.

"We need more housing — not just for Pasifika, but for everyone," she said.

The community group was also leading discussions about alternative community-based health services that could
be offered in Waitaki — at a triage level and also preventive care.