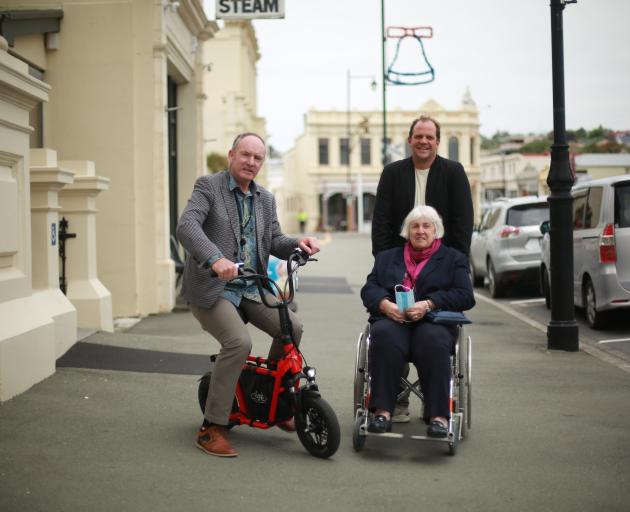 But if you are a wheelchair user, those little things can be major obstacles.

In Oamaru on Thursday, Jane Knewstubb challenged Waitaki District Council roading manager Mike Harrison and councillor Jeremy Holding to experience the problems wheelchair users and their carers face while navigating the streets of the North Otago town every day.

Mrs Knewstubb is advocating for more accessible streets and, being pushed by Cr Holding in her wheelchair, she led Mr Harrison from the council headquarters in Thames St to Wansbeck St, and back.

Along the way, she pointed out the challenges for people who have mobility issues - such as crossing railway lines, a lack of road crossing points, steep kerbs, potholes, the location and size of disability parking spaces and narrow and uneven footpaths - and Cr Holding and Mr Harrison experienced them first hand.

The busy intersections of Thames and Itchen Sts and Itchen and Humber Sts were of particular concern, she said.

Mr Harrison has multiple sclerosis and used his own mobility scooter to get around with Mrs Knewstubb. He said he understood the need for better infrastructure.

That was why feedback and real-life examples from people such as Mrs Knewstubb were so important, he said.

"[The council is] not always right. Sometimes we miss the obvious."

Mrs Knewstubb has been waiting nine years for a knee replacement and used crutches until recently, when she started relying on a wheelchair to get around. But she had been aware of accessibility issues in Oamaru for many years, as a foster carer for several children with disabilities, she said.

"When I have to get people to take me anywhere, I’m getting embarrassed because I’m having to say ‘Oh look, we won’t go there today because of the hassle of getting in and out of the place’."

The challenge the council faced was bringing everything together, while being sympathetic to the heritage features of the area, Mr Harrison said.

The council was conducting a parking study, and feedback such as Mrs Knewstubb’s was invaluable in its development, he said. The public would have an opportunity to make submissions and the completed report would feed into the development of the next long-term plan.