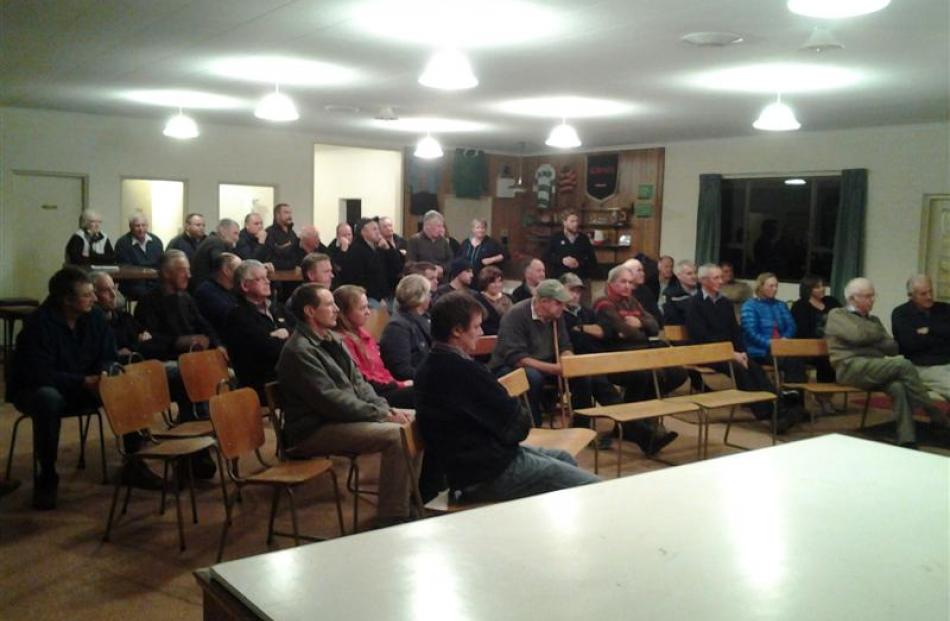 Some of about 50 people who attended a meeting in Ngapara last night to hear police outline how they investigated the deaths of more than 200 sheep last year. Photo by David Bruce.

Members of the Ngapara community were told by police last night why it was believed dogs killed more than 200 sheep in their district last year, but some of about 50 people at a public meeting were still not fully convinced.

The meeting was called after requests from the community for more information, and because of misinformation carried on social media websites.

The officer in charge of the investigation, Detective Warren Duncan, outlined the process followed and said the aim of the meeting was not to convince people about the police findings but to give the facts so people could make their own decisions.

After that, some at the meeting still questioned whether dogs were to blame, based on injuries, number of sheep killed and other factors.

One farmer said he had seen the results of dog attacks and the type of injuries the sheep received did not fit.

Another asked ''how the hell'' dogs could kill that many sheep in one night, prompting murmurs of agreement from others.

Originally police thought the sheep had been shot and at last night's meeting some questions and comments covered types of bullets which could have been used, how they could disappear into the ground and not be found and why some people were not interviewed during the inquiry.

Otago Coastal area commander Inspector Jason Guthrie said significant resources had been committed to the inquiry, he was ''completely confident'' it had been thorough and the right conclusion was reached.

The dogs would have been covered in blood and wool.

Despite being unable to find any proof such as footprints, tyre prints, the sound of gunshots, bullets or fragments in the sheep or ground, bullet casings, police continued with that initial assumption.

Experts initially felt dogs could not have caused the extensive injuries.

Only days before the first killings on June 20 and 21 two dogs - a small terrier and a young Rottweiler - went missing and were found, but there was no evidence such as wool or blood on them to implicate them.

The same dogs went missing before the second killings but, again when found, there was no evidence they were involved.

''What did not gel,'' Det Duncan said, was the lack of bullets, casings, bullet fragments in the bodies, rifle shots and obvious entry and exit wounds. There were also the crush-type injuries on many sheep, particularly skulls and nose.

What was also relevant was two dogs were found on farms at the time and where the sheep were killed.

Other possible causes were investigated such as killing with crossbows or blunt force trauma, such as a pipe.

Test firing was also done with a variety of bullets on sheep skulls and ''were nowhere near the injuries'' on the dead sheep.

A forensic veterinarian believed the injuries were caused by a dog. He also took samples for canine DNA analysis, but they did not workDet Duncan said police would not identify the dog owner, but he suspected some people in the community knew who they were.

He acknowledged that, without witnesses, there would always be unanswered questions.

But considering all the facts, police were ''comfortable'' with the findings.

While there was strong circumstantial evidence the two identified dogs were involved, a legal opinion was there was not sufficient evidence to prosecute.

Det Duncan said the dogs' owners, whom he described as ''lovely, lovely people'', were ''very, very devastated'' to think their dogs were involved. Both animals had been put down.