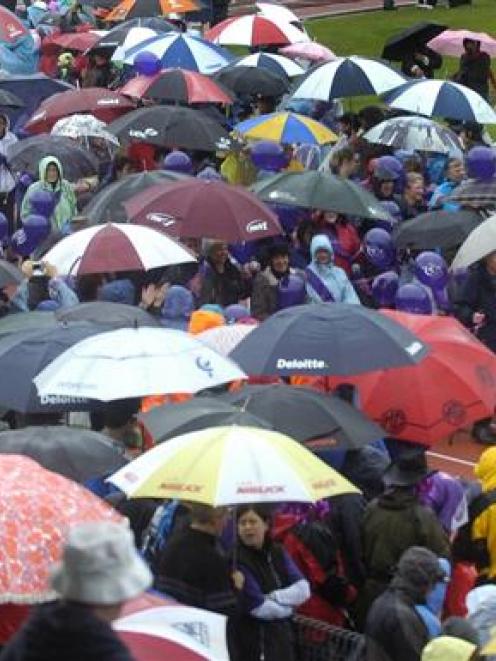 A carpet of umbrellas covers the athletics track at the Caledonian Ground, Dunedin, as cancer survivors lead the first lap of Cancer Society Otago's fundraising event, Relay for Life, at noon on Saturday. The relay was called off at midnight because of the weather. Photo by Peter MIntosh.
North Otago seems to have borne the brunt of the wettest weekend of the year.

While rain was widespread around the province, the Clifton Falls bridge, on the Kakanui River, south of Oamaru, appeared to have topped the rain gauges.

During Friday and Saturday, 110mm [4.33inches] of rain was recorded there - 75mm of it falling on Saturday, with the peak hourly rainfall of 7.5mm recorded at 8am on Saturday morning.

The Kakanui River went through its first flood alarm of 50cumecs, at 8.20am on Saturday morning.

Otago Regional Council duty flood officer Jessica Bell said yesterday the Kakanui did not reach the second flood alarm level and there had been no reports of flooding in that area.

The Shag River, near Palmerston, was not as badly affected as had been predicted and while the Pomahaka, in South Otago, rose it did not reach flood alarm levels.

Ms Bell said the Leith Stream in Dunedin was "not too badly affected" despite 27mm of rain on Friday and 48mm on Saturday at Sullivans dam.

Surface flooding caused roading problems in some parts of the province.

Last night, the NZ Transport Agency reported State Highway 1 near Pukeuri, north of Oamaru, was still closed due to flooding, but a detour was available.

A Palmerston weather station recorded a total of 123.9mm rain over the 48 hours to 9am Sunday with 89mm on Friday and 34.9mm on Saturday.

However, farmers were delighted with a drenching that will improve grass growth and give winter crops a boost going into the autumn.

Taieri dairy farmer David Wilson said the rain was "being absorbed and is greatly appreciated".

The low pressure area that brought the rain is weakening but a developing low was expected to bring heavy rain to the west overnight and possibly more rain for the east of the province.

The MetService warned yesterday of moderate or heavy rain of up to 120mm in the 24 hours to 6am today in Westland, north from Haast, but rain easing this morning.