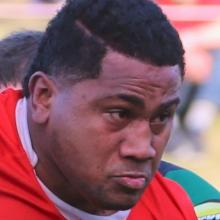 Petelo Pouhila
A violent incident during a night of partying at Twizel in November resulted in two Kurow and former North Otago rugby representatives being jailed yesterday.

Petelo Pouhila (22) and Juris Harvard Fale (24), both of Twizel, appeared before Judge Joanna Maze for sentencing in the Timaru District Court on charges related to the incident that left three men injured, two of them seriously.

Pouhila, who was last week named North Otago club rugby player of the year, had earlier pleaded guilty to charges of wounding with intent to cause grievous bodily harm and careless driving causing injury.

A supporter of the two men in the public gallery shouted at them to "be strong" as they were led from the courtroom.

A police summary of facts said both men were at a party with more than 20 others at a Twizel house  on November 12 when a fight broke out between several people, and  quickly escalated into a large brawl.

Fale became involved in the fracas, which spilled out on to Mackenzie Dr.

During the fight, Pouhila got into a white Honda Civic and drove to help Fale, despite several people trying to stop him. 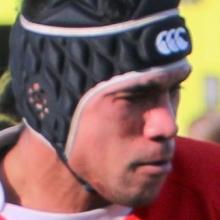 Juris Harvard Fale
While driving at speed Pouhila swerved towards a group of pedestrians walking on the road and intentionally struck one of them.

The victim suffered serious injuries, including a broken eye socket, when he bounced off the car and landed on the road.

He also suffered swelling and bruises to both knees.

The second victim smashed the driver’s window of the car after his friend was struck, before he was knocked unconscious by a punch to the head from Fale.

He also suffered a fractured foot and spine and shoulder injuries, which hospitalised him for several days.

Pouhila then turned his vehicle around and accelerated towards the first victim and struck him a second time, before fleeing the scene in the vehicle and parking at an associate’s address.

The third victim was injured while he was assisting the first victim.

While cradling the first victim’s head, Fale approached him.

When Fale was asked if he injured the first victim, he responded by punching the third victim in the head twice before he fell and hit his head on the road.He suffered a broken tooth and sustained a cut to his face and alump to his head.

The first and second victims were flown to Dunedin Hospital.

When spoken to by police Pouhila said the first victim jumped in front of his car and that he was not aware the second victim had been struck.

Fale offered no explanation for his actions.

As the working visas of both Pouhila and Fale had expired they faced deportation when released, Judge Maze said.

Both Pouhila and Fale were instrumental in Kurow’s run to the Citizens Shield final against Valley, won by the latter 28-22 last Saturday.

Pouhila has played seven games for North Otago and Fale three. Both were members of the 2017 Heartland Championship squad.