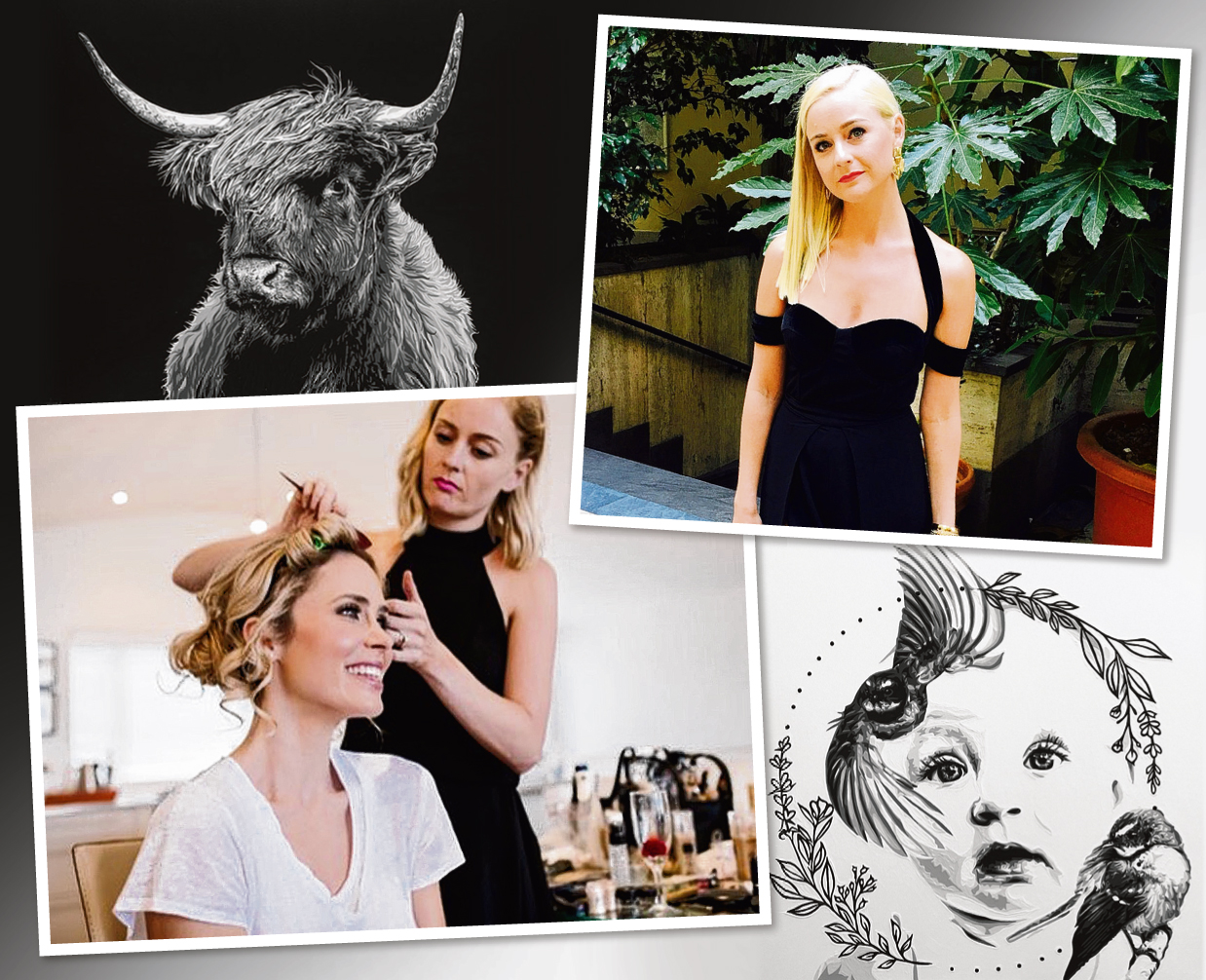 Auckland artist Bridget Harding has developed a career in hair and make-up artistry and painting. Her painting of a Highland cow (top left) is for sale at Art on Tyne in Oamaru. PHOTOS: SUPPLIED
Oamaru will always have a special place in Bridget Harding’s heart. The Auckland artist talks to Rebecca Ryan about forging a career that fulfills her creative side.

Bridget Harding felt like a nervous “little girl from Oamaru” on her first day as a hair and make-up artist on an Auckland TV set.

The former Waitaki Girls’ High School pupil had landed a job doing hair and make-up for Mediaworks, and on her first day she had to prepare several “famous faces” for an all-night TV3 special for Prince William and Kate Middleton’s wedding.

Over the next five years, those famous faces – such as Mike McRoberts, Hillary Barry and Rachel Smalley – became friends, as she developed her career in hair and make-up artistry.

She always knew she would pursue a creative career, despite being discouraged from studying art and other creative subjects at school. Instead, she was told she should take typing, physics and geography classes – ”subjects you can use”.

But creativity was in her blood. Both her grandfathers were artistic – one had a little art studio at home, and the other made wooden toys.

When Harding left school, she moved to Auckland to study hairdressing at Servilles Academy.

But after injuring her neck in a car crash in 2007, she struggled to work full-time as a hairdresser.

Fascinated by beauty and the power make-up had to transform people, she decided to study at the Samala Robinson Academy in Auckland.

With qualifications in hairdressing and make-up artistry, she stood out from the crowd in Auckland and was soon given her break in television work.

She started working at Mediaworks in 2011, doing hair and make-up for presenters on 3 News‘ 6pm bulletin and Firstline morning news programme.

“The mornings were insane. Your alarm would go off at 3am – it’s the most unnatural thing,” she said.

“I would do lots of politicians’ make-up – it was so interesting the people you would talk to. Jacinda Ardern had a wee weekly slot on a Friday back before she was prime minister.”

After five years at Mediaworks, she started looking for a new challenge. She put her name forward for a role at Shortland Street and “was lucky enough to land a full-time job”.

Shortland Street was “another exciting workplace”.

The make-up team was always the first to arrive on set and last to leave, she said.

The work was very fast-paced, with just 20 minutes to shoot a scene and a feature film’s worth of footage captured ever week. Spending so much time with the cast and crew, they soon became like family, she said

“There are so many amazing people that all feel like a family – those in front of the camera and behind.”

Special effects was a new skill she developed working on set, figuring out how to create convincing injury wounds and keeping them consistent and realistic throughout different episodes.

“It’s such a crazy machine and takes a lot of work to get what you see on air.”

She also did hair and make-up work off-set for New Zealand celebrities.

In 2019, she was approached by Anna Hutchison, to do hair and make-up for the New Zealand actor’s wedding, which was featured in Woman’s Day. Hutchinson flew back to New Zealand from America for her wedding, and Harding did not get a chance to meet her or have a trial before the big day.

“That was insanely scary,” she said.

Harding and her husband, Jon, now have two young children – Taylor Faye (4), who is named after Harding’s grandmother Faye Nichol, a former instructor at the Waitaki Community Recreation Centre, and Hugo, who turns 2 next month.

Harding left her job at Shortland Street when Hugo was born, and has since turned her hand to painting, while continuing to do some freelance make-up and hair work.

She started painting portraits as gifts for family and friends, and it “snowballed” from there. She has recently launched a new website for her art, and has work for sale at Art on Tyne in Oamaru, and The Artists Room Fine Art Gallery in Dunedin.

She specialises in black and white portraits, and brings subjects to life using acrylic on canvas.

One of her favourite paintings is of her daughter, surrounded by fantails. The fantails represent Harding’s grandmother and grandfather, Faye and Dave Nichol, watching over her daughter.

“Whenever we walk the track around the deer park at my parents’, two fantails are always flying close to the kids.

“I like to think it’s Faye and Dave. Gran would be flying gracefully and gramps would be whispering cheeky secrets in her ear.”

Harding has no formal training in painting. She has just played around and refined her techniques over the years.

“It’s funny to see how far I have come since the beginning.”

During Level 4 lockdown in Auckland, painting had been her “escape and happy place”, when her children were sleeping.

“But I have now run out of paint and supplies – so bring on [Alert] Level 3,” she said.

Harding’s parents, Niall and Wendy, now live in Timaru, but they still spend summer holidays in Otematata – that tradition “will never change”.

Harding has come back to her home town several times to do hair and make-up for weddings, working alongside local photographers such as Rachel Wybrow. She missed the North Otago town and enjoyed the opportunity to spend time with family and friends when she visited for work.