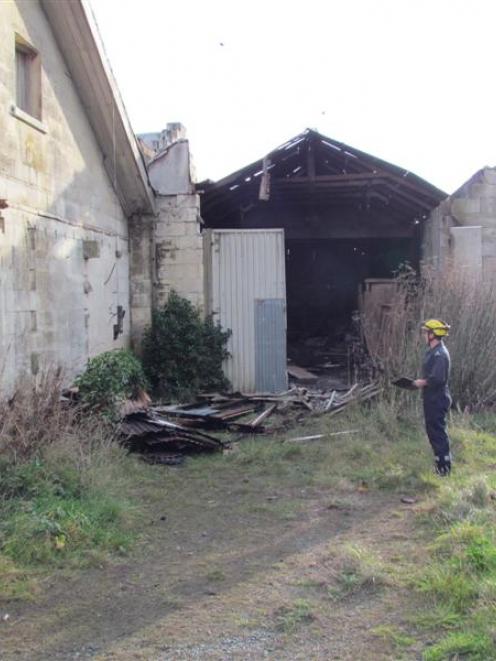 Fire inspector Paul Glanville, of Queenstown, yesterday checks into a fire in the historic freezer building on the Oamaru foreshore. Photo by David Bruce.
A suspicious fire in one of Oamaru's historic buildings on Sunday is being investigated by police and a fire inspector.

Part of the empty Oamaru Freezing Works building on the Oamaru foreshore was damaged by a fire, reported about 10.30am on Sunday by a member of the public who saw smoke.

Detective Warren Duncan said it could have been smouldering for some time, possibly a couple of days beforehand.

Yesterday, Detective Duncan and Queenstown-based fire inspector Paul Glanville were on site attempting to establish the cause of the fire and whether it was suspicious.

Afterwards, Det Duncan said the fire was suspicious, and further investigation was needed to find a cause.

''We would be very interested to hear from anyone who may have seen smoke coming from the area over a couple of days [before the fire was reported] or seen any activity in the area of the building over the weekend,'' he said.

People could contact him at the Oamaru Police Station, or anonymously through CrimeStoppers on 0800 555-111.

The fire in one of the wings at the rear of the building damaged wooden roof supports, walls, an access sliding door, roofing iron and stored timber. The Oamaru Fire Brigade attended for about an hour.

The building is unoccupied, but used for storage.

The Oamaru stone freezer building, opened in February 1886, is one of Oamaru's major historic buildings and thought to be New Zealand's oldest surviving freezing works, Heritage NZ says. It has a category 2 listing.

It was in disrepair and there have been various proposals to use the building.

The relatively unaltered state of the freezer building makes it an important example of an early freezing works complex.

Built by the New Zealand Refrigerating Company as a freezer and store on a site close to the railway line and the port, it was designed by Oamaru architect Thomas Forrester.

Sheep for the works were slaughtered at the company's Eveline Refrigerating Works, 5km north by rail.

The works closed after the company built a new processing plant at Pukeuri, which began operating on March 5, 1914.