Principal to step down in December 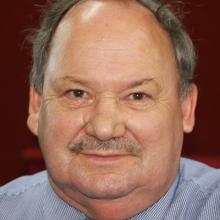 Lennox Sharp
The principal of East Otago High School has announced he is stepping down after six years in the role.

Lennox Sharp will retire at the end of the school year in December.

He did not wish to comment on what he planned to do in retirement or reveal his age.  Mr Sharp was deputy principal at East Otago High School for two years before becoming principal.

He commenced his 24-year teaching career at South Otago High School, in  Balclutha, where he was promoted to  head of geography and social sciences.

He had previously worked in the Department of Industries and Trade and in a family business in Invercargill before taking up teaching.

His wife, Yvonne, said  he "would be a good teacher" and prompted him to train as a secondary schoolteacher.

He graduated from Otago University, majoring in geography, and taught senior geography with considerable success.

Mr Sharp gained a distinguished service award from the New Zealand Geographical Society in 2014 for his work as a geography teacher and a leader in the profession.

In a speech to pupils  and staff on Thursday, he said he had enjoyed working at East Otago, first  as deputy principal and then as principal, overseeing the development of young people and guiding them towards their future life choices.

He had been impressed with the strengths of the staff  and the attention  they were able to give pupils  in a years 7-13 high school.