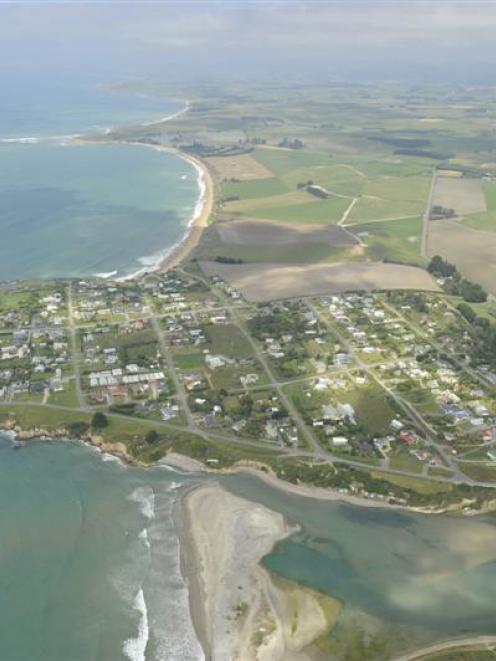 Photo by Gerard O'Brien.
Kakanui, 12km south of Oamaru and 6km east of Maheno, is split by the Kakanui River, which snakes east from its origins in the Kakanui Mountains to its mouth on the Pacific coast.

The river splits Kakanui South - sometimes referred to as Taranui - from Kakanui North, and can be crossed by the wooden Kakanui bridge, erected in 1896 after a previous bridge built in 1872 was washed away in a flood.

Originally developed as a group of cribs, Kakanui has become more densely populated in recent years with permanent residents.

There are competing stories regarding how the small town got its name.

One explanation is that the name is an amalgam of the Maori word kaka, meaning parrot, and nui, meaning many.

Another narrative suggests it means "swimming or crossing a river", while a third account simply suggests it was named after the ancestor of an early inhabitant.

In the photo (centre, top), surfable Campbell's Bay lies behind the settlement, merging into All Day Bay to the south.

The area is renowned for its soil and Kakanui clay is used in cricket pitches in many of the country's finest venues, including the Oval in Dunedin.

The soil is also very rich, supplying the base from which market gardens produce keenly sought new-season potatoes, cucumbers, tomatoes and capsicums.

The beaches and river, which is a popular spot for whitebaiters, have meant the area is a popular holiday spot over summer.

It is also known for its limestone formations containing numerous fossils, and was formerly the site of a quarry.