Salmon key to life for tribe

By Hamish MacLean
0 Comments
In a bid to return salmon to their sacred river, a California First Nations tribe yesterday visited the Hakataramea hatchery where the chinook salmon were first introduced to New Zealand rivers.

Winnemem Wintu hereditary chief and spiritual leader Caleen Sisk was in South Canterbury to learn the history of the Mchenrys Rd hatchery where McCloud River chinook salmon were released into the tributary of the Waitaki River in 1901. The tribe had a sacred connection to the salmon and like the fish, her people had suffered after settlers moved into the forests of northern California. 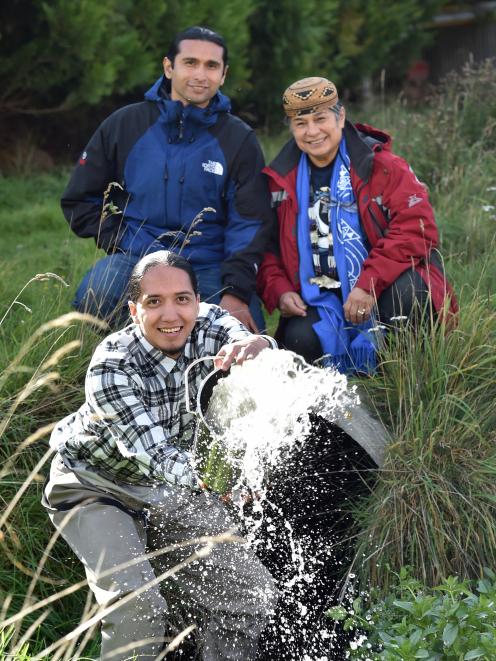 Winnemem Wintu tribe member Nicholas Wilson tips a bucket of water outside the Hakataramea Valley hatchery where Californian McCloud River chinook salmon were first introduced to New Zealand. His cousin, Michael Preston (left), and Winnemem Wintu hereditary chief and spiritual leader Caleen Sisk look on. Photo: Peter McIntosh
Before 1900, 14,000 Winnemem Wintu people lived along the McCloud River. By 1910 there were only 395, she said.

"Right now there’s 126 Winnemem Wintu people who still believe in the Winnemem way of life — so we’re trying to build that up," Ms Sisk said.

"And one of the ways that I believe we can build that up is to bring back the salmon.

"When the salmon comes home, whatever happens to salmon, happens to us. If we can replenish the salmon, maybe we get to grow in population too."

The construction of the Shasta Dam during World War 2 not only degraded salmon habitat, it had flooded her people out of their homes. And when plans were made to extend the dam, her people’s war dance in 2004 made international news, which was when she learned there were genetic descendants of the McCloud River’s fish, which her people had believed were extinct, in New Zealand.

She received an email from a professor saying: "We have your fish; do you want them back?"

In 2010, Ms Sisk came to New Zealand with 27 others from her tribe. She met  Ngai Tahu representatives  and performed another dance, a "hupa chonas", to let the salmon know of the plans to relocate the fish back to their ancestral home.

Despite the ease with which salmon were taken from the Baird Hatchery on the McCloud River in 1900, now American regulations required DNA evidence to show the fish belonged in McCloud River.

In June last year, the tribe started crowd-funding for the salmon restoration project and in 10 months raised $86,060. Members of the tribe will return to New Zealand in July to collect DNA samples of winter run salmon taken by Central South Island Fish & Game officers. Graeme Hughes, of Kurow, a retired Fish & Game officer,  said he found the tribe’s story of loss "emotional". He  was "pretty confident" the tribe would get the evidence it needed to relocate the fish.