Hundreds of seabirds swarmed while small fish washed ashore this week as a ‘‘spooky’’ scene unfolded at an Oamaru beach.

Allied Press Oamaru bureau chief Rebecca Ryan was at the beach in Beach Rd, south of Cape Wanbrow, with friends on Tuesday evening and chanced upon the scene about 7.45pm.

‘‘Everything was normal ... I took a nice sunset shot at the beach and then all of a sudden birds just arrived out of nowhere — lots and lots of birds,’’ Miss Ryan said.

Hundreds of seabirds, including red-billed gulls and white-fronted terns, converge on a beach south of Cape Wanbrow on Tuesday evening as small fish wash ashore. Photos: Rebecca Ryan
‘‘It was actually quite spooky and if I didn’t have people with me [it might have been more upsetting], it was a little bit unnerving, almost. Because the birds were right around us. And fish were washing up at our feet - never seen anything like it before,’’ Miss Ryan said.

Red-billed gulls, black-backed gulls and white-fronted terns began congregating on the sand, flying over the shallow water, and ‘‘dive-bombing the water’’. 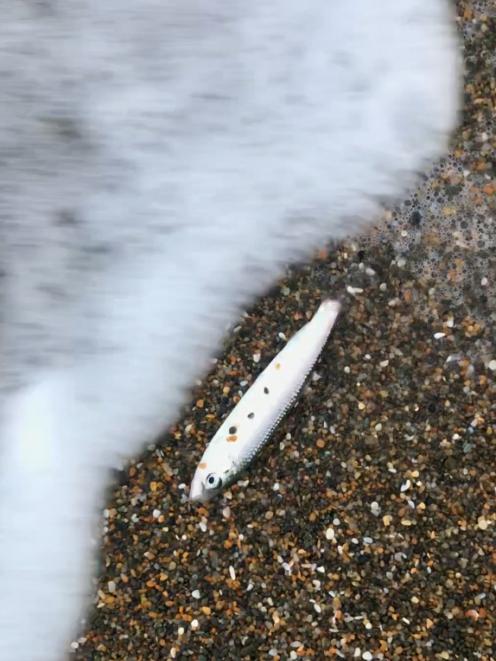 The group approached the ‘‘hundreds’’ of birds and as the group got closer waves started washing the small fish ashore at their feet.

He said it was possible they were chased into shore by some predatory fish, most likely a kahawai.

What could happen was that as the about 12cm to 20cm fish were being chased, they would beach themselves to avoid being eaten by predatory fish.

Oamaru Fishing Charters’ Neville Scoles, without having seen the video, said he had seen yellow-eye mullet do the same. Those fish could be chasing ‘‘anything’’ including krill or sardines or like the pilchards could be avoiding ‘‘something predatory offshore’’.

‘‘They could be just playing in the shallow water like they do. It’s nothing unusual. I have seen them ground themselves before. You end up with a whole heap of them on the beach.’’