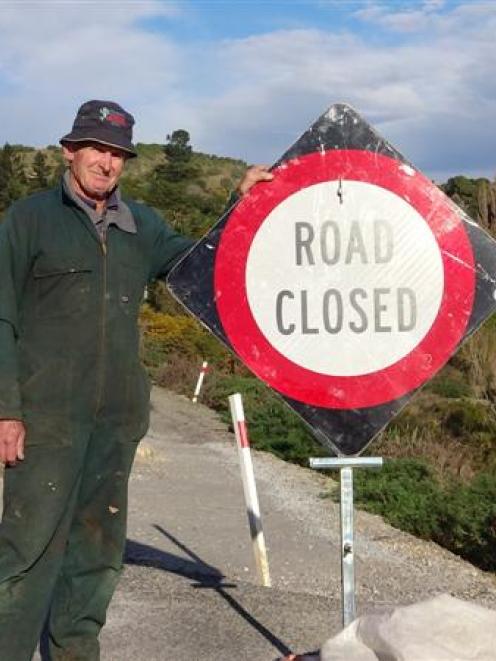 Moeraki resident and businessman John Beattie with the 'road closed' sign at the eastern end of Haven St. Photo by Bill Campbell.
Main-road access to Moeraki is now so bad a sign should be put up by the railway line at the State Highway 1 turnoff saying ''road closed, access for residents only'', Moeraki restaurateur Fleur Sullivan suggests.

The main access, Haven St, is blocked by a slip and she fears someone will be seriously injured on the narrow and what she called ''inadequate'' alternative access route being proposed by the Waitaki District Council via Davids, Tenby and Haverford Sts.

Mrs Sullivan's fears about road safety have been echoed by other Moeraki business people.

Funding of $70,000 has been approved by the council to upgrade the alternative access to the seaside village but Waitaki District Council roading manager Michael Voss described the Haven St slip as ''a nightmare'' for the council.

Four Moeraki businesses spoken to by the Otago Daily Times said they were losing custom over the closure of Haven St, east of Davids St, which discouraged people from entering Moeraki.

The alternative route was not going to work, Mrs Sullivan said, as trees and poles at the top of Haverford St posed a problem.

The Haven St slip had never previously been allowed to deteriorate so far, and usually loads of gravel were placed on the road several times a year, including before the summer holidays and before the Waianakarua Lions fishing competition at Easter.

Mrs Sullivan said Haven St should be re-opened, and gravel placed on the slip-affected section. It had effectively had a one-way section for the last few years and could continue to operate like that.

The closure of part of Haven St was having an impact on Bill and Bev Beattie's Moeraki Beach motels, as the couple said people were having difficulty finding the motels. Moeraki Village Holiday Park operators

Kristina and Robbie Mitchell said they had a similar problem and would like to see the Haven St entrance to Moeraki preserved. Mr Mitchell said an urgent ''patch-up job'' was needed on Haven St and consideration given to reconstructing the street. A

meeting of Moeraki businesspeople called by the council on August 2 was told by council chief executive Michael Ross Haven St was ''a major problem'' and that no ''viable long term solutions'' had been found.

Funding of $70,000 had been approved for improvements to Tenby and Haverford Sts for widening and re-alignment.

Depending on the weather, it was hoped to have the work completed by Labour weekend, Mr Ross said.

Signs would also be erected at the Tenby-Haverford St corner to direct people to Moeraki village and road marking on sections of Haverford and Tenby Sts would improve safety.

Mr Ross said it would be difficult to restore the damaged section of Haven St east of Davids St due to a combination of a long Indian summer then heavy rain in June, which had made the slip far worse than it had been in the past.

Putting more gravel on the damaged section could make the situation worse, as it could trigger more slips. While there was only $70,000 available for improvements to the bypass around the Haven St slip, other sources of funding could be sought, Mr Voss said.

''The council wants to see this work progress,'' he said.

A bridge had been suggested as a longer term solution to the Haven St slip, but any bridge, even with deep foundations, would be likely to shear at the abutments from the pressure of the slip.

The railway line built into Moeraki in 1875 faced almost similar problems when the first trains ran over the line.

Another option, a floating raft bridge, would be extremely expensive, Mr Voss said.

In the meantime, about $42,500 is to be spent on priority work to resolve urgent stormwater, ponding, spring and road issues.

A Moeraki working group, set up to liaise with the council and Waihemo Community Board, recommended up to $25,000 be allocated to improve Haverford St for heavy traffic and towing vehicles, $7500 to improve stormwater drainage in Milford St, $5000 to intercept a spring above Cardiff St and $5000 for ponding alongside lower Tenby St.

The funds will come from the Moeraki amenity rate.