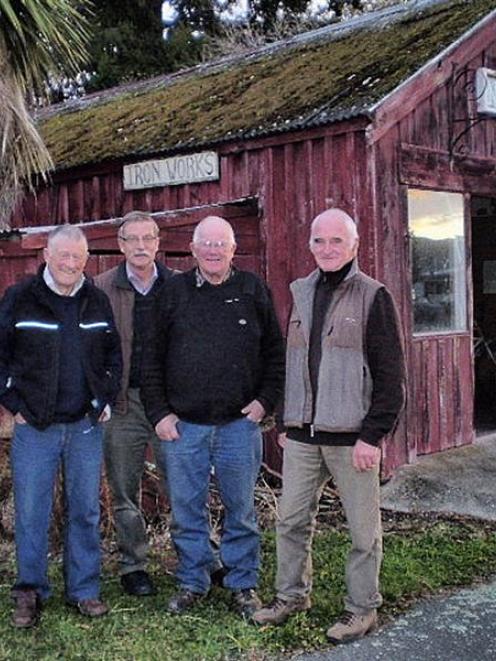 Three of the men who saved Nicol's Blacksmith Shop from demolition, Burns Pollock (left), Bill Simpson (second from right) and John Hore (right), with Mike Gray (second from left) outside the Duntroon building.
The vision of four North Otago farmers in the 1970s has paid off, with the historic Nicol's Blacksmith Shop in Duntroon receiving national recognition from the New Zealand Historic Places Trust.

The "smithy" has been given category one status, meaning it is a place of special or outstanding historical or cultural heritage significance or value.

There were seven "smithies" on the trust's register, but Nicol's was the only one associated with a small town.

It was saved from demolition in 1974 when it was bought by John Hore, Burns Pollock, Bill Simpson and the late Jim Harvey.

As children, the four men had spent time with then-owner Nicol Muirden pumping the bellows for him.

He sold to Tom Gibson, an engineer-mechanic, making Mr Muirden the last blacksmith to work the smithy.

Mr Gibson used the premises for light engineering until 1974.

In 2006, the Nicol's Blacksmith Historic Trust was formed, with the intention of restoring the building as a heritage attraction.

The trust was delighted the Historic Places Trust had recognised the foresight of the farmers and it looked forward to seeking community support to make the restoration project a reality, trust chairman John Hore said.

It had been great over the years to be able to educate young people about the past, Mr Hore said.

The business was founded in the 1890s, catering to the needs of horses and horse-drawn vehicles, as well as making tools and equipment for farmers.

It later included a carriage building and paint workshop, and expanded in the 1920s when a motor garage was joined to the smithy to cater for the growing motor trade.

Today, the building is very much in its original condition - timber-framed and clad, and unlined.

The interior of the working areas are full of the original equipment, including the forge, bellows, wheel pit and jig.