Station should be cared for: historian 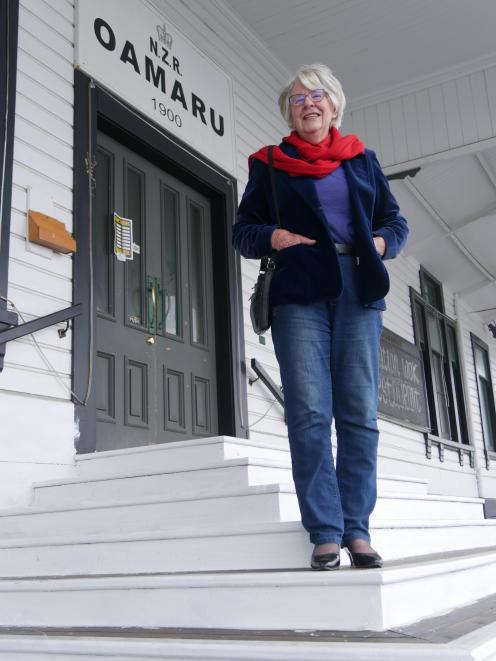 Historian Helen Stead would like to see a resurgence in railway passenger travel, and the Oamaru Railway Station as the first stop. PHOTO: RUBY HEYWARD
Between a rock and a hard place.

That is how historian Helen Stead feels about the state of the Oamaru Railway Station.

Mrs Stead has raised concerns with the Waitaki District Council and the Oamaru Whitestone Civic Trust about untidy condition of the station.

The former Heritage New Zealand board member and Waitaki district councillor now owns Oamaru Heritage Tours Limited — taking up to 120 tours a month under Level 1, many of which are booked by those chartering by train.

As Covid-19 restrictions reduced air travel and made cruise ships obsolete, Mrs Stead saw huge potential in railway passenger transport — but not with the current state of Oamaru’s station, she said.

She would like to see the railway station restored to its former glory to welcome people to the district.

Built in 1900, the station had a tumultuous history — at least since government services such as New Zealand Rail were sold to private companies during the "Rogernomics" era of the 1980s.

In the mid-’80s, the Oamaru Borough Council was offered the station for "nothing" but declined, she said.

It was then moved between three different owners, and Oamaru Steam and Rail kept it "locked and tidy".

Rather than having it fall into disrepair, the Oamaru Whitestone Civic Trust bought the building in the 1990s.

It was placed under the Heritage New Zealand covenant and was classed as a category2 historic place.

Now the station was in the private ownership of John Huang who opened the Station Wok restaurant four years ago, and the platform was owned by KiwiRail — the State’s successor to New Zealand Rail.

Waitaki Mayor Gary Kircher believed KiwiRail was responsible for the station’s restoration after "abandoning" it in the past.

Previously the council had supported restoration efforts and had recently been asked to step in and repair the station, Mr Kircher said.

He understood the station did not provide a good introduction to Oamaru for those travelling by train, but the council had no control over the privately owned station.

KiwiRail executive general property manager Olivia Poulsen said the company sought to maintain the platform to an "appropriate standard", but it was the building owner’s responsibility to maintain the station.

Mr Huang said he had been continuously restoring the building, but due to the Covid-19, the restaurant’s revenue had dropped by about 70%.

"We can only think of ways to maintain the expenses of the railway station, such as historical house insurance, fire detection, historical building maintenance fees and land tax, etc [and] we can only rent out part [of the building] to make up for a small loss."

Mrs Stead said it was a difficult situation for Mr Huang and believed due to the station’s past and future uses it was the "collective community’s" responsibility to keep it tidy.