Ask Bob Archer about steampunk and he will tell you there is a whole lot more to it than a fancy costume and interesting back story.

Known in steampunk circles as Viscount Eastman Wesley Archardt III, he is in Oamaru for the ninth annual Steampunk NZ Festival, after jetting over from his home town of Neenah, Wisconsin, in the United States. 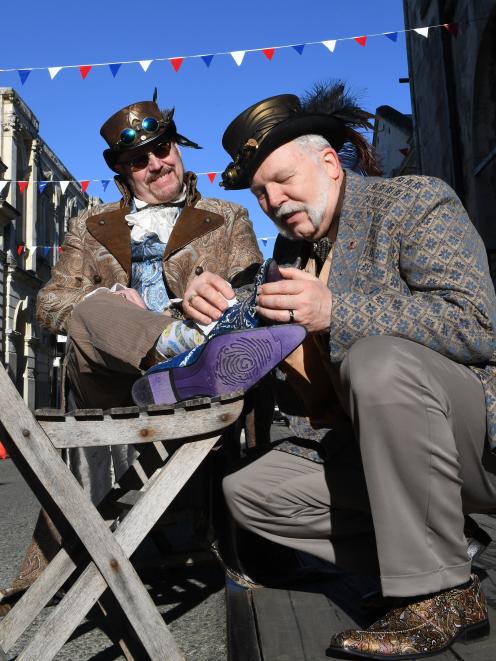 Allen Borgwardt (right) makes sure Bob Archer looks his best for this weekend’s Steampunk NZ Festival in Oamaru. Mr Borgwardt and Mr Archer, both from Wisconsin in the United States, are regulars at the festival. Photos: Stephen Jaquiery & Hamish MacLean

An interior designer by trade, Mr Archer became involved with the steampunk movement about four and a-half years ago.

"I have always been a tinkerer and I love playing with things, taking things apart, building things. That kind of led to doing the costume design ... and a fascination with period styling which led to my intrigue for steampunk."

A fan of Victorian-era writers like Jules Verne and a self-admitted science fiction buff, he said the combination of those interests and his background in design "morphed together", which made steampunk the perfect fit.

More than half of the 45 people he assisted had varying levels of dementia and he found activities based around the steampunk genre helped keep their minds active.

"I do presentations before I go to events like the Steampunk NZ Festival to show them what I’m doing. That’s worked in to activities with the elders where we actually build and create things. We have boxes of pieces and parts like copper tubing and things like that. We just sit down and create things. A number are interested in steampunk, too."

This year marks the third time Mr Archer, together with husband Allen Borgwardt, have attended the Queen’s Birthday weekend festival.Mr Archer will act as announcer at the tea pot racing event at the Oamaru Club on Saturday afternoon, a job he looked forward to.

He said the American steampunk scene was a lot smaller than that of New Zealand, but those involved were no less enthusiastic.

"It’s not as big as it is here. In the United States we have a number of dynamics; cosplay, fantasy, renaissance festivals, things like that. Steampunk has its own niche ... but it’s a completely different dynamic to what you have here."

The Steampunk NZ Festival started last night, and concludes on Sunday with a gala ball in the evening.