By Rebecca Ryan
1 Comment
Oamaru teenager Alvira Repia-King is on the mend after being attacked by a shark at Friendly Bay on Sunday afternoon.

The 13-year-old received 52 stitches — 42 in her right arm and 10 in her back — after she was bitten several times by a shark while swimming near Holmes Wharf. 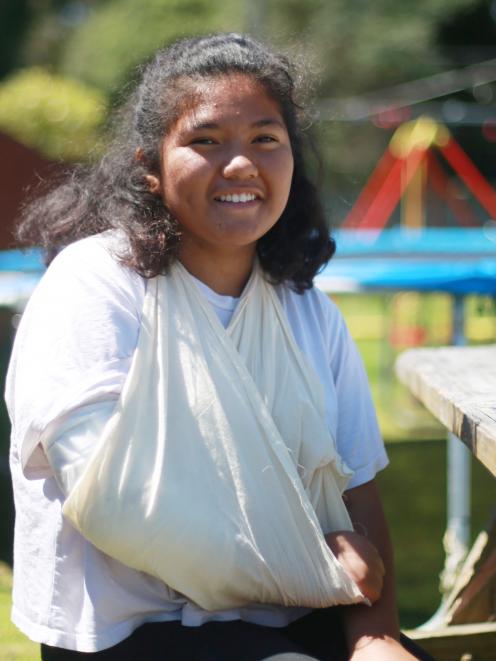 Alvira Repia-King recovers at home in Oamaru after being attacked by what is believed to be a sevengill shark at Friendly Bay on Sunday afternoon. PHOTO: REBECCA RYAN

Alvira was enjoying a sunny Sunday afternoon at Oamaru Harbour with four of her friends before the attack. Some of her friends had been jumping off the wharf, but Alvira was "just floating" in the water by herself when she felt something bump into her back.

"It bumped me from behind, and then underneath me at first," she said.

"It felt like metal, a big round thing was hitting me, because it felt really hard.

She tried to remain calm as the shark gripped her arm.

"It kind of hurt at first and then I just started trying to swim, and I was screaming."

When she reached the wharf, she was pulled to safety.

The shark, described by witnesses as dark grey and about 1.8m long, swam off. It was believed to be a sevengill shark.

In a state of shock, Alvira did not feel any pain at first. She was supported by her friends, a friend’s parents, and a couple who saw the incident and rushed to help.

"Once I saw the blood it kind of just like started hurting," she said. 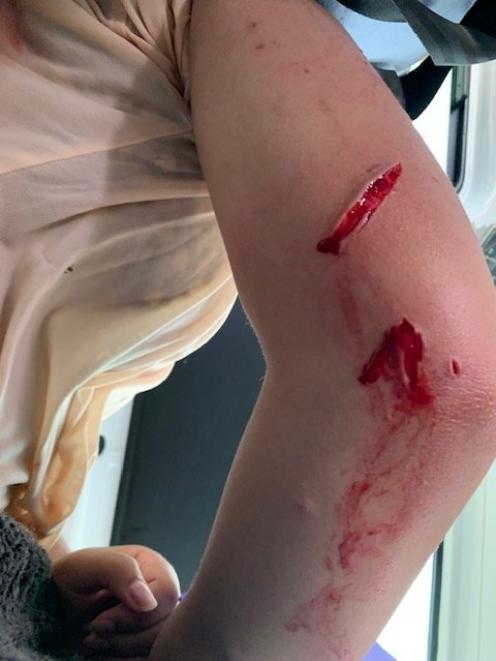 She needed 42 stitches in her right arm. PHOTO: SUPPLIED

She had been swimming in the harbour several times and had never seen a shark there.

She did not know if she would feel comfortable swimming there again.

Emergency services were called to the scene about 4.30pm and Alvira was treated by St John and transported to Oamaru Hospital. She returned home about 9.30pm on Sunday.

She had an uncomfortable sleep and was feeling tired yesterday, but said her pain level was about a 4 out of 10.

A Department of Conservation spokeswoman said incidents of this nature were rare and most encounters between humans and sharks did not result in bites.

They were "very curious animals", and fast movements and splashing could trigger them to investigate.

"Of course, their way of investigating is by biting things," Mr Lewis said.

People should not be scared of swimming in Oamaru Harbour, he said.

"[Sevengill sharks] have been around for a very long time, and the fact that we have so few negative interactions like this should speak to the fact that they’re not usually a problem."

If approached by a sevengill shark, the most important thing to do was to keep eye contact with it, "after which, you should try, as calmly as possible, to exit the water".

Must've though she was a sea lion I guess. Seem to be more sharks around lately which is pretty awesome.