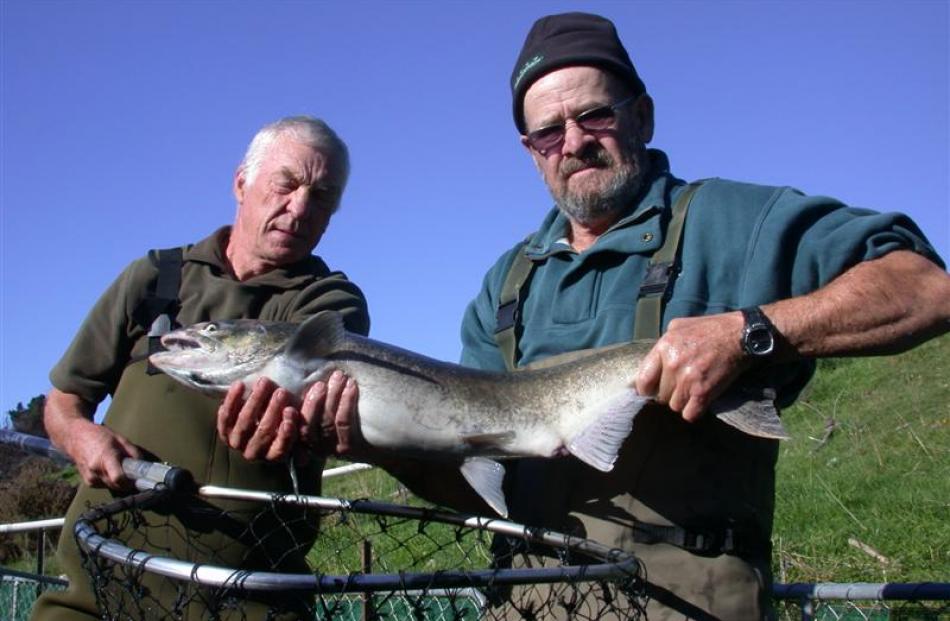 Rex Turpin (left) and Les Crosbie with one of the salmon brought from the Hakataramea River to Welcome Creek on the lower Waitaki River. Photo by David Bruce.

Salmon anglers would have been drooling: eight large salmon penned up in Welcome Creek, a tributary of the lower Waitaki River.

The salmon were not there for the taking, but were the first captured in a programme to build a hatchery that will rear the fish in a bid to reverse declining numbers in the Waitaki River.

The Waitaki Riparian Enhancement Trust, formed in April last year, is working with the Central South Island Fish and Game Council to produce salmon fingerlings to release in to the lower Waitaki River.

This is the first season the trust has captured fish in the Hakataramea River, one of their natural spawning waters, and transferred them to Welcome Stream, a spring-fed stream which flows into the Waitaki River just above the State Highway 1 bridge on the south side.

That is where the trust will build its hatchery, incubate salmon eggs and then transfer fry to a race on the north side of the river where they will be kept until they weigh about 90g. They will then be released into the river.

The trust was formed following a public meeting into how to improve salmon numbers in the Waitaki River, which have fallen in recent decades. The Waitaki trust secretary, Lin Koevoet, yesterday said the first salmon were captured about two weeks ago and brought to Welcome Stream, 10 females providing about 50,000 eggs fertilised by one male and sent to the McKinnon Hatchery for incubation.

The second capture of seven females and one male arrived at Welcome Stream on Friday.

Weighing up to about 8kg, they were checked yesterday for the best time to harvest the eggs, likely to be tomorrow.

The trust is hoping to send workers back to the Hakataramea River on Friday to capture more salmon.

Fry, about 5g in weight, will come back to the Bell's Pond rearing race in September, to be raised up to 90g before being released in April-May-June.

Fins will be clipped for anglers to record when the salmon return, giving an indication of the success of the programme.

When the cycle starts again next year, the trust hopes to have built its own hatchery to incubate eggs on Welcome Stream.

The trust now has about 200 members, most from the Waimate and Oamaru areas but also as far away as Christchurch and Invercargill. Its work so far has been funded by members with a grant from the Meridian Energy Ltd community fund and Waitaki Salmon Fishing Contest fund. 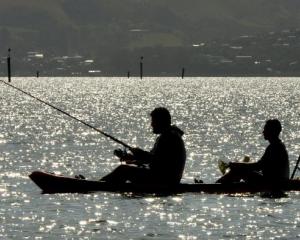 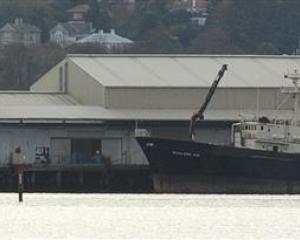 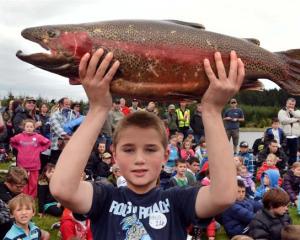 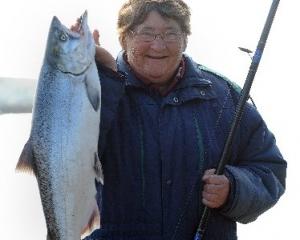 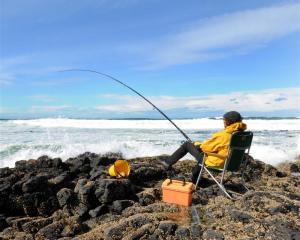 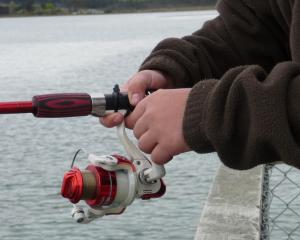