Trust to give autistic children every chance 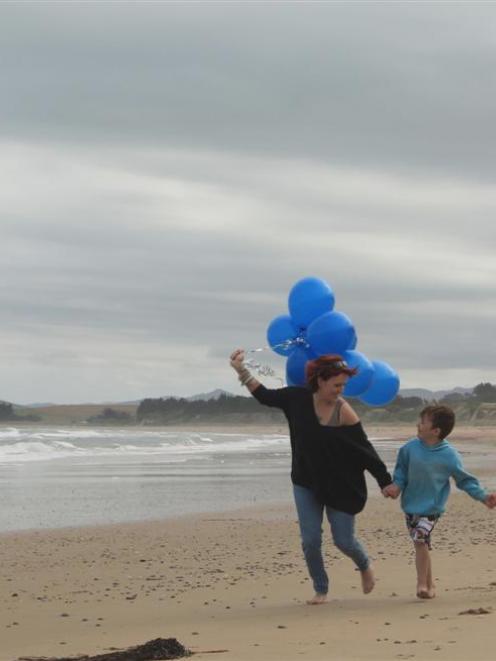 Waitaki Autism Trust chairwoman Yanina Vidal and children Ian Tacchini (7) and Bella Tacchini (3) run along the beach with blue balloons to raise awareness about Autism. Photo supplied.
Every child with autism should have the chance to reach their maximum potential and the newly-formed Waitaki Autism Trust is on a mission to give them that opportunity.

Oamaru women Yanina Vidal and Stephanie Peters established the Waitaki Autism Trust in December last year as a support network in the Oamaru area and a way to provide funding for parents to use an internationally recognised treatment known as ABA (Applied Behaviour Analysis).

Ms Vidal and Mrs Peters have seen how ABA therapy, a one-on-one intensive programme involving therapists working with children in their own homes, can help children with autism.

Unlike many Western countries, New Zealand does not fund ABA therapy. It will cost $76,000 a year for four Oamaru families to receive 12 hours of ABA therapy each week.

The closest network had been the Otago Autism Trust in Dunedin, but the distance to access support and the travel costs pushed Ms Vidal and Mrs Peters to branch out and create the Waitaki Autism Trust.

''There was just nothing here for kids. If we ever needed any help we'd have to go to Dunedin,'' Ms Vidal said.

''We just thought it was time for us to move on and do our own. It's still a work in progress, but I can only see it grow from now on.''

All members of the Trust have children diagnosed with autism and for chairwoman Ms Vidal, four years of the therapy had been ''life changing'' for her son Ian Tacchini.

From being a ''completely non-compliant'' 3-year-old, Ian is now going to Pembroke School. He's communicating, he's socialising, he's reading and he's ''loving it'', she said.

''He still has bad days, of course, but he's learning to cope and that's because of early intervention,'' she said.

Initial funding for the trust will be put towards training two therapists to work with four children with autism in the Waitaki area.

As well as funding ABA, the trust will be a support network for all Waitaki families with autistic children. Ms Vidal said there were seven families on board and many more in Oamaru.

''I know lots of families that haven't joined us yet. Seven is just a small number, but it's great progress and we're all very proactive.''

Ms Vidal, who as well as chairing the trust, is works part-time and studies, said she knew how hard it was to accept that a child had autism.

''I knew that Ian had autism when he was 8 months old and I didn't have anyone to talk to because I was so scared to just say: `He has autism','' she said.

Ms Vidal hopes the trust will create a network of positive people in Oamaru who can help combat the stigma of autism.

Wednesday was World Autism Awareness Day and to mark the occasion, Pembroke School raised awareness about the disorder, with pupils dressing in blue and making gold coin donations to the trust. The Oamaru Opera House is being lit blue for the week in support.