Crews are continuing to battle the blaze at Lake Ohau despite challenging conditions such as strong winds and high temperatures.

"A drone equipped with an infrared camera would be deployed tonight to look for hotspots along the perimeter of the fire. 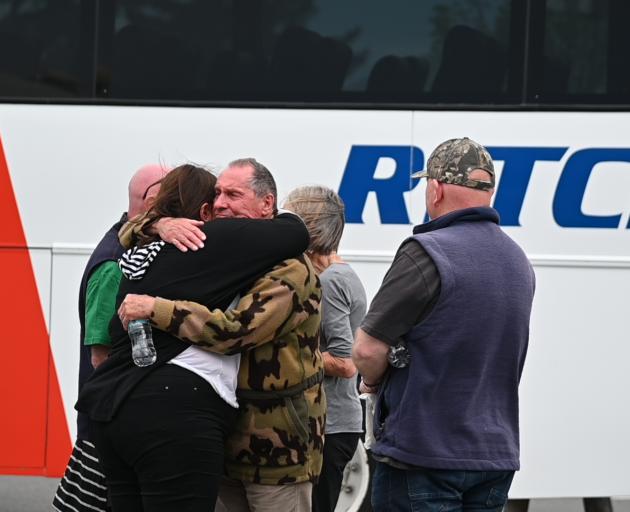 "Structure protection crews would be working through the night to deal with any flare-ups that might threaten properties that had escaped damage yesterday. Helicopters and ground crews will be back on the ground at first light."

"Crews are working to reduce the hazards around undamaged properties, including fire-damaged trees, loose iron and debris. That work will need to be completed before residents can be given unrestricted access."

Investigators looking into the cause of the fire have asked for help from the public.

They would like to hear from those who observed the fire in the early hours of Sunday morning, up until 7am, Fenz said.

This afternoon, village residents were escorted through the township to view the devastation this afternoon and there was plenty of emotion.

"Residents who need to retrieve essential items from undamaged properties within the fire cordons can register to be escorted to and from their homes from tomorrow.

"The managed access will be for urgent essential purposes, such as tradespeople retrieving tools or people needing medication."

A helicopter takes off at first light to tackle the Lake Ohau fire. Photo: Craig Baxter

After returning to Twizel Events Centre from the trip, Dwayne Rennie, the co-owner of The Barn At Killin B&B, said it was "like a bomb had gone off".

An emotional Mr Rennie described seeing metal twisted by the heat of the fire.

He said there was so little left of some homes they were "absolutely unrecognisable".

He would have liked to get out to search for one of his cats, but no-one was able to get off the bus during the trip. 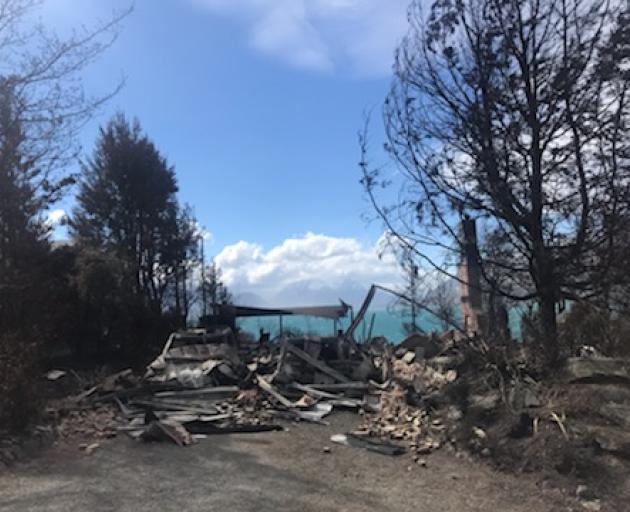 Several homes have been destroyed by the fire. Photo: Daisy Hudson

It could have been worse though.

"That everyone got out of there alive is amazing.
Otago Principal Rural Fire Officer Graeme Still said it was the worst fire in terms of property damage he has seen in his 40 year career. About 40 houses have been left "uninhabitable", he said. 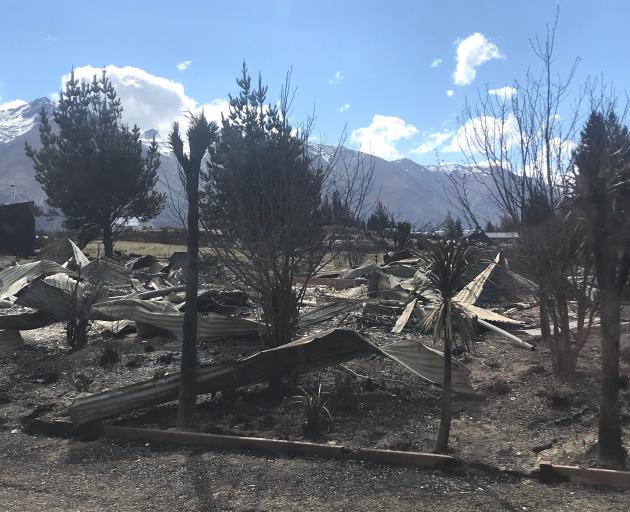 This house in Lake Ohau has been completely destroyed by the fire. Photo: Daisy Hudson
Media were taken on a tour of the devastated town. Many houses have been reduced to blackened shells, while others have been spared and appear untouched by the blaze.
After authorities earlier confirmed that between 40 and 50 homes and structures were destroyed in the village in the Waitaki district, Civil Defence Minister Hon Peeni Henare gave an update on the situation this morning after seeing the devastation for himself.

"What we have just witnessed is completely devastating for the people of this community," Mr Henare said.

He said there was no "rhyme nor reason" about the devastation, with houses completely destroyed while neighbouring houses escaped unscathed.

Mr Henare announced the Government had provided $100,000 to a mayoral relief fund as initial support to those affected.

The ministers and Waitaki District Mayor Gary Kircher thanked firefighters and Civil Defence staff for the work they had done.

"This is really a tragic situation and one that I hoped I would never have to deal with," Mr Kircher said.

The support from across New Zealand they had received was "really humbling".

Firefighters had the blaze contained in a perimeter, but were still battling hotspots including in the town itself.

They were working to ensure none of the flare-ups resulted in further damage to property.

Fire and Emergency Incident Controller Rob Hands said that assessment of the damage to homes was still under way.

As of midday today the fire had burnt 4600ha, of which 1900 is conservation estate. The fire had a perimeter of 41km.

Despite the challenging conditions, with strong winds and warm temperatures, Mr Hands said he was confident that crews would have achieved 50% control of the fire perimeter by tomorrow night.

That would place a 10m boundary of cold ground around the fire along half of its perimeter.

Civil Defence Minister Hon Peeni Henare meets with Civil Defence staff and firefighters. Photo: Craig Baxter
About 90 people were forced to sleep away from their homes overnight after they were destroyed in the 1608ha fire, which began about 3.15am yesterday, and destroyed much of the village.

Officials confirmed  earlier today that between 40 and 50 homes and structures were destroyed.

"We can confirm that between 40 and 50 structures are uninhabitable, pretty much destroyed... and about 40 that are as good as gold. There's a more detailed assessment that has to be done but that lifts that number up," Fire and Emergency's Mike Grant told TV1's Breakfast programme.

Mr Kircher told RNZ's First Up programme this morning it was lucky residents got out when they did.

"The reality is it's a minor miracle that no-one has been harmed, if it had been another 15-20 minutes it would have been a very different story."

MetService duty forecaster Tui McInnes said that the winds around Ohau would strengthen today and it wouldn’t be until tomorrow some "rain spillover" was set to hit the area.

Mr Still said there were no injuries or loss of life as residents and visitors in up to 70 homes were forced to flee.

More than 100 people had registered at an evacuation welfare centre operating at the Twizel Events Centre.

Mr Still said there were no injuries or loss of life as residents and visitors in up to 70 homes were forced to flee. 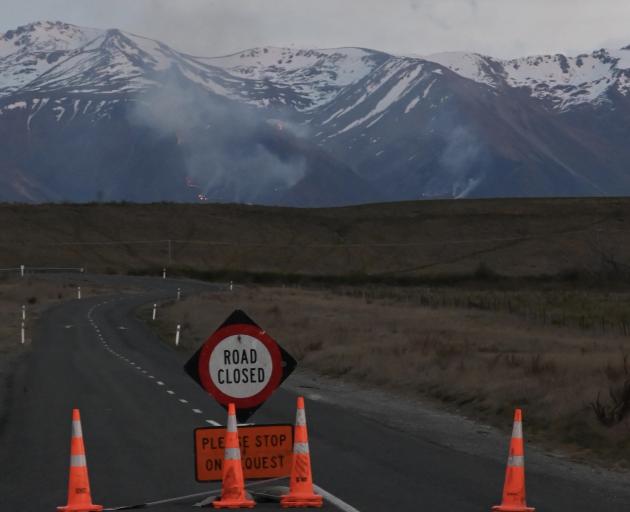 More than 100 people had registered at an evacuation welfare centre operating at the Twizel Events Centre.

Sixteen crews worked to steer the fire away from other structures and critical infrastructure, including the main power lines servicing Queenstown and Wanaka.

Dunedin man Andy Winneke caught sight of the blaze that destroyed several homes at Ohau from where he was camping about 4.30am yesterday. PHOTO: ANDY WINNEKE

The scenes on the ground looked "like a war zone".

Lower temperatures and easing winds overnight would provide some relief, he said.

An urban search and rescue team would complete an assessment of the damage today.

Mr Still said he had "quite an upsetting meeting" with residents, who were told they would likely be able to return and access their properties today.

William Brown (12), of Auckland, said he was woken by his mother in the middle of the night.

"We woke up at 3am and there was a fire outside our window. I thought Mum was overreacting at first, but no," he said. 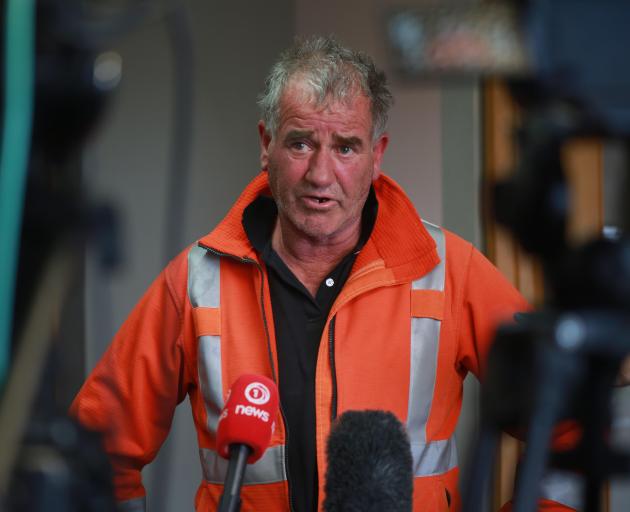 The family’s holiday home had been destroyed.

"We forgot lots of things. The only thing that’s still [standing] is the chimney and our outside table."

The Barn at Killin B&B owner Hugh Spiers described the horror of being separated from his father in the dark while driving through the "terrifying" blaze.

Mr Spiers said he received a phone call about 3am warning him and his guests to get out urgently.

"It was like the movies. It was really, really scary.

"The flames were big and smoky, thick with heat - there was no time to even take a photo.

"We couldn’t get out our normal way - we had to cross country through a fire break." 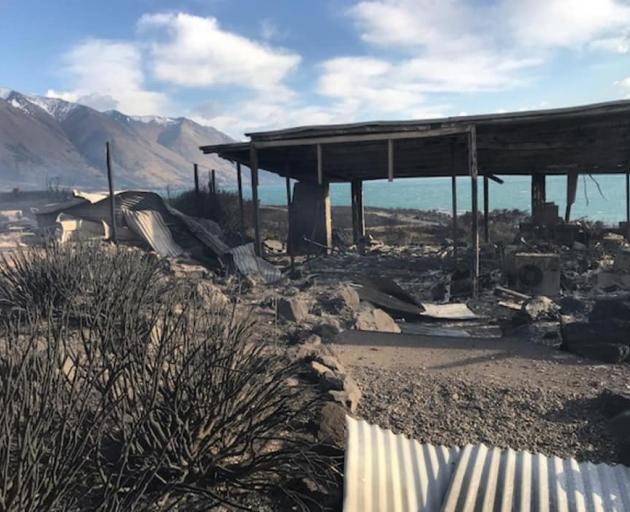 The fire-ravaged remains of a house near the shore of Lake Ohau. PHOTO: SUPPLIED
Mr Spiers reconnected with his father, and all his family and guests were accounted for.

Mr Winneke and his family were camping across the lake and after "a fairly sleepless night" due to high winds he saw the beginnings of the blaze about 4.30am.

Network Waitaki chief executive Geoff Douch said it was too early to tell what might have sparked the blaze.

He had heard no reports of downed or damaged power lines.

"Last night we had extreme winds in the area, an unprecedented level of winds," he said.

"We’ve had to isolate power out of the whole Ohau area, for safety and so that fire services can safely put out the fire."

Mr Kircher said the mood at the welfare centre was tense at times.

"It is a very stressful time.

"There’s a lot of people feeling very stressed and upset as you’d expect and part of that is that for some it’s that they know their house is gone, and for others they just don’t know yet and it’s a pretty hard wait until they do find out."

The Lake Ohau fire was one of three large fires in the South Island yesterday.

A large pine forestry fire also broke out about 3.15am in the settlement of Livingstone, about 30km northwest of Oamaru.

A third fire, further north in Golden Bay, was brought under control after two helicopters and seven crews responded.