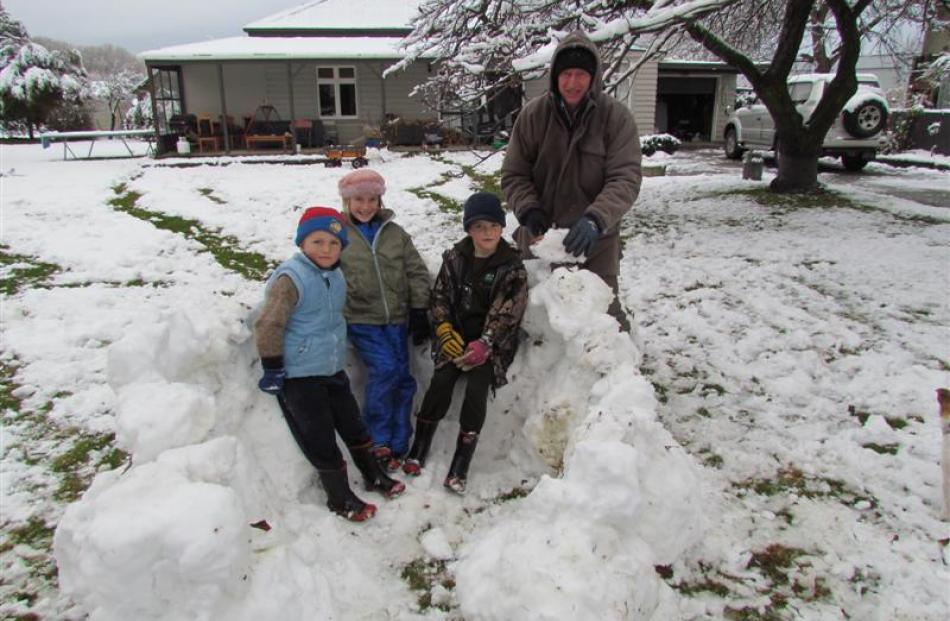 Building an igloo with the help of their father, Chris Horn, are (from left) Lochie (5), Holly (9) and James (8) Horn, of Otekaieke. Photo by David Bruce. 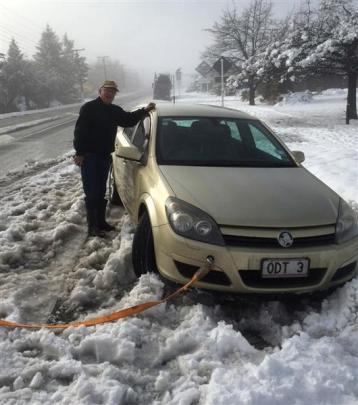 ODT reporter David Bruce found himself chain-less and stuck in snow in Omarama yesterday morning and had to be pulled out by Omarama Fire Brigade first response unit member Terry Walsh. Photo supplied.

Network Waitaki was hit with a double whammy on its power lines network over the past two days - first high winds and then snow.

The winds on Thursday morning caused problems for individual consumers, particularly in the Danseys Pass and Tokarahi areas.

That was followed later in the day and at night by heavy snow, which also affected consumers, particularly in the upper Hakataramea Valley, Ohau and Quailburn areas.

Yesterday, the company was focusing on reconnecting consumers and did not have any numbers about how many households had been affected.

It had all its repair teams out on the ground, from Thursday, joined by a steady stream heading up the Waitaki Valley from yesterday morning.

Company chief executive Graham Clark said two helicopters were used to fly over lines in areas it knew were usually badly affected when snow fell or where a concentration of faults calls had come from.

They were able to identify where the problems were, what they were and what equipment and materials might be needed to repair them.

By doing that, it was able to speed up repairs.

Teams worked until dark last night to connect as many consumers as possible.

The major problem areas were feeder lines into Quailburn and Ohau, west of Omarama, where an estimated half a metre or more of snow was on the roads, making access difficult.

Teams would be out again today at dawn and would continue to work until all consumers were reconnected.

In the Waitaki Valley, snow was on the ground in Duntroon, gradually increasing in thickness to about 5cm at Kurow.

Unusually, there was very little between the Waitaki Dam and just east of Otematata, but it gathered again from the Otematata Saddle to Omarama where about 10cm to 15cm had settled. Falls were heavier, further west of Omarama.

The Lindis Pass opened again early yesterday after snow ploughs had cleared the road, but motorists were being advised to carry chains.

State Highway 8 from Fairlie to Twizel and SH80 into Mt Cook were closed yesterday.