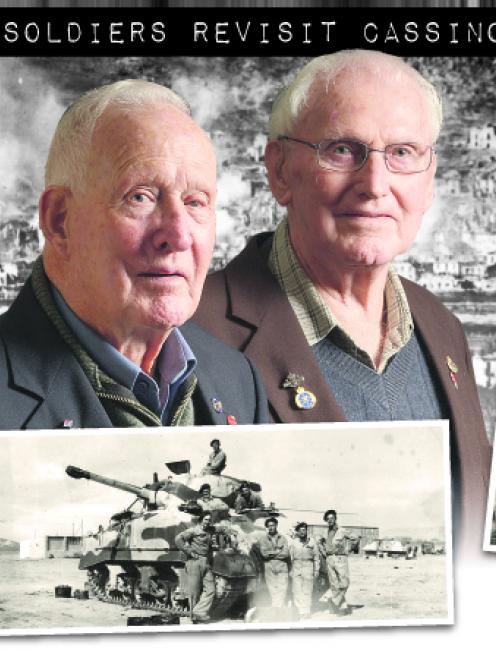 Old soldiers Bill Roulston (93, left) and Tom Dungey (91), at the Tapanui RSA this week and in their war days. Photo by Gerard O'Brien.
The advanced guard of World War 2 veterans, all aged in their 90s, will this week travel to a place they remember as a scene of horror and devastation to honour comrades who never got to grow old.

Tom Dungey (91), of Tapanui, Alex McBurney (93), of Frankton, Jim Quested (91), of Georgetown, and Bill Roulston (93), of Tapanui, will join 37 surviving comrades in Italy to commemorate the 70th anniversary of the Battle of Monte Cassino.

The small Italian town, dwarfed by a 1400-year-old Benedictine monastery, was the scene of one of the worst battles involving New Zealand troops in WW2.

The journey back in time will be especially poignant for Mr Dungey, whose older brother, Jack, was killed at Cassino on March 18, 1944, and is buried in the Cassino Commonwealth War Graves Commission Cemetery.

Mr Dungey will mark his 92nd birthday on May 18 with a visit to the grave of Private Jack Dungey when the veterans attend a service at the cemetery.

''It's amazing that I am able to go at my age. It will be the first time I've been back since the war, so we'll see how it hits us. I'm sure it will be emotional,'' Mr Dungey said this week.

''The town won't be flattened, like it was when we left it.''

Mr Roulston (93) was called up when he was a 20-year-old teamster working on a Balclutha farm.

''We were pretty young and naive when we went away. You didn't know what you were going to. We were excited, though. It was a big adventure,'' Mr Roulston said.

He, too, nearly never left Cassino, after being buried in a collapsed building which killed 10 of his comrades.

''We were very lucky [to have survived]. It got to the stage you could be killed at any time. You didn't know when your number was up,'' Mr Roulston said.

''It was pretty hard to see someone you knew killed. It doesn't do to talk about it too much. We're talking about it now, but always kept quiet about it until a year or two ago. It's hard to know what's right and what's wrong now.''

It was common for New Zealand soldiers to maintain a stoic silence about their war experiences.

''You didn't want to say that the chap next to you was wounded and you had to leave him and move on. It sounded barbaric,'' Mr Dungey said.

''If you think about the number of people killed in World War 2 ... we were very lucky. It's going to be very interesting going back.''

Mr Quested (91) said he was ''more apprehensive than excited about the trip''.

''They say you should never go back,'' he mused yesterday. ''But, I will visit the grave of Tommy McPhee, who died of wounds at Cassino. I was at his send-off at the Awamoko Hall, in Georgetown, in 1942.''

Mr McBurney (93) was looking forward to seeing the town in peacetime and the monastery restored rather than ''in rubble''.

The veterans will attend Mass at the restored Abbey of Monte Cassino, visit Cassino Railway Station, take part in the National Commemorative Service at the Cassino Commonwealth War Graves Commission Cemetery and attend the Commonwealth Service of Remembrance.

The operation to transport the 41 veterans to Italy on a commissioned New Zealand Air Force Boeing 757 has been funded by the New Zealand Government.

''It's a significant anniversary and is being financed by the Government to honour the veterans and the sacrifices they made,'' New Zealand Army defence communications group editor Judith Martin said.

Next month, New Zealand will also mark the 70th anniversary of the D-Day landings, on June 6, 1944.

The Cassino veterans will gather in Auckland before they leave New Zealand on Tuesday and arrive in Italy on Thursday. The group returns to New Zealand on May 24.