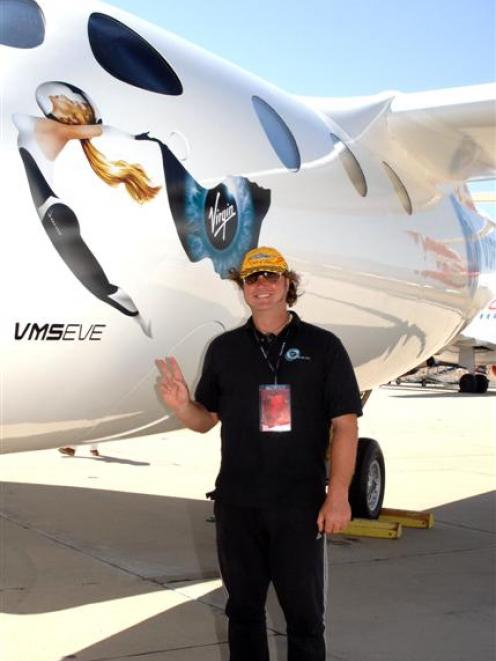 Makouri Scott, of Wanaka, alongside the mothership ''Eve'' at Mojave Spaceport, California, which he will board early next year on Virgin Galactic's first space holiday flight.
A Wanaka artist believes he will raise millions of pounds at a gala charity auction in London for the Stone Age-style drawings he will do in space.

Having passed all mandatory medical training, it is up to individual future astronauts to undertake their own programmes.

He is a photographer, painter and environmental artist who has travelled and created internationally for more than a decade and has produced works now held in collections throughout Europe, Canada, the United States, South America and Australasia.

Scott's hopes to raise a large amount at a charity auction are based on the high prices his works sell for. Three pieces listed on the website of British jewellers Hymans were valued between $NZ2.49 million and $NZ4.1 million.

Although based in Wanaka, Scott is spending the rest of the year in an art residency in Tahiti but also hopes to spend about six months painting in Barcelona.

Viewing his paintings is by appointment only and most of his clients are from overseas.

The suborbital flight departs from Mojave Spaceport, California, taking its two pilots and six passengers 110km to 120km off the face of the Earth.

‘‘I will be attempting to document the entire journey via a series of drawings, some of which will be from a zero gravity perspective while viewing the Earth,'' Scott said.

‘‘I will be creating a series of graphite pencil drawings on portable stone slates - Stone Age art in space.''

The biggest impact occurs when leaving the atmosphere at 3-3.5Gs and again when returning at 6Gs at a speed of more than 2500mph - over three times the speed of sound.

‘‘I believe we are subjected to GZ leaving the planet and GX reentering.''

‘‘GX is a force that comes directly through your chest - intense.

‘‘We are trained in specific breathing activities to deal with this pressure.

‘‘GZ is a force that compresses your body from the top of your head to your feet - equally intense.

‘‘GY is a force that is sideways, such as that experienced by fighter pilots in a high-speed banking turn. It was 2005 when Scott initially contacted Sir Richard while snowboarding in Canada. He was working in the Caribbean on an art commission for the deputy prime minister of Turks & Caicos Islands, when he had a reply from Sir Richard.

Scott flew directly to London to a meeting with Virgin Galactic president Will Whitehorn and commercial director Stephen Attenborough.

‘‘I agreed to book my ticket immediately [May 2005], securing ‘founding member status'.''

‘‘I was one of their first customers and most certainly the first New Zealander, although it did take me three years to pay off my ticket.

‘‘I believe this is the first suborbital space adventure available for mere mortals.

‘‘It's really cool because anyone can go provided they pass the medicals and have some spare coin.

‘‘Essentially what it means is that you don't have to be Nasa elite to experience space; anyone can go.''

The charity or charities to receive the money from the drawings Scott creates in space are yet to be determined.

‘‘Globally it's difficult to know were to start, as there are just so many issues in need of attention. I will probably just set up an international umbrella fund and spread the love around.''

‘‘Personally, I would like to help protect endangered species both here in New Zealand and internationally.''

Scott has already booked a second trip into space planned to depart from a spaceport in Sweden at a time yet to be confirmed, during which he will be able to experience the aurora from space.