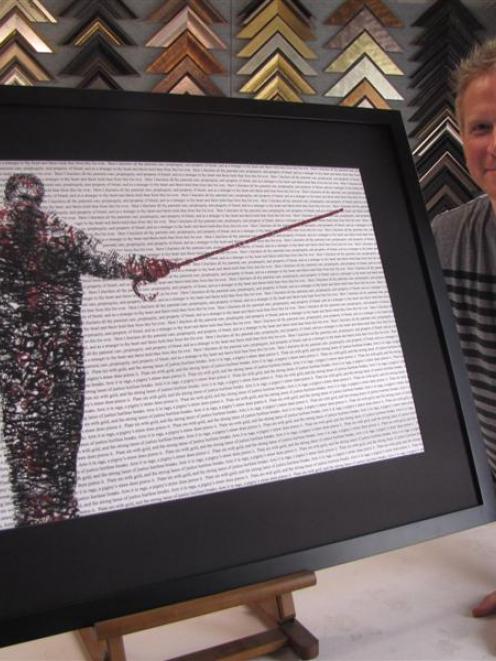 Arrowtown-based artist Paul Sewter with one of his pieces, <i>The Dispassion of Michael,</i> created using digital text painting. The piece is being sent to Croatia to be included in the inaugural World Art Games. Photo by Tracey Roxburgh.
Shakespeare has provided the inspiration for an Arrowtown artist's first collection of digital text paintings - with one piece winging its way to Croatia to form part of the inaugural World Art Games.

Paul Sewter (40), who is originally from the United Kingdom, applied last year to be part of the World Art Games, an event which will bring together artists and their works from all over the world.

The former landscape architect graduated from London's Camberwell College of Arts in 2007 with an MA (distinction), specialising in digital painting.

The technique involves selecting text and then using that text to create a virtual paintbrush, which is used on an electronic tablet to create the piece.

His first series, ''Control, Alt, Delete'' features 10 pieces - all using Shakespearean quotes - and took about a year to create.

The first in the series, The Dispassion of Michael, has been selected for inclusion in the World Art Games and after the event will tour Europe before being displayed in a museum.

It uses two quotes, both from King Lear, to form both the background and ''Michael''.

A huge amount of work went into choosing the text.

''When you find the right piece it's like a lightbulb moment.

While traditionalists could be forgiven for thinking text painting was ''cheating'', Sewter argued it followed the same principles.

''The actual painting process is the same as if you're doing a traditional painting ... If you want to correct something, there's still a process you go through to correct it.''

Sewter said he had associated himself with an art movement called the Intentists, founded by Vittorio Pelosi, who believed an artist's intent should be obvious or articulated throughout their work.

The full ''Control, Alt, Delete'' series, featuring a variety of Shakespearean quotes, will be displayed at the New Zealand Art Show in Wellington in July, the event designed to showcase the work of emerging New Zealand artists.