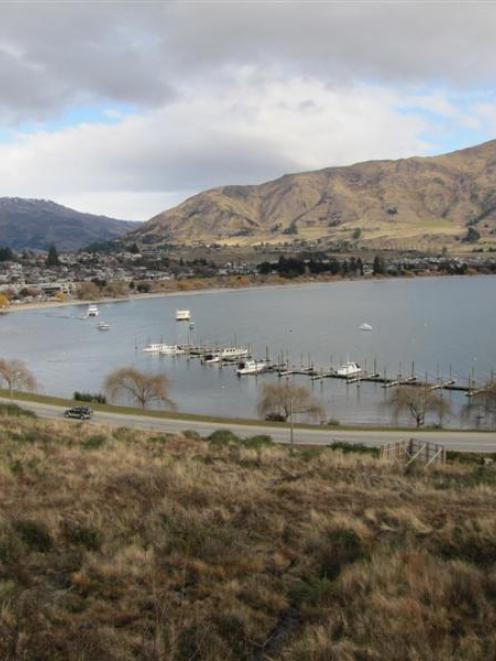 Development of public facilities along the shores of Roys Bay, Lake Wanaka, is likely to follow the construction of the $85 million Marina Tce apartment complex on the land in the foreground. Photo by Mark Price.
Progress on the new upmarket Marina Tce apartment complex along Lakeside Rd is likely to be just the beginning of a makeover for the Lake Wanaka foreshore that will even include better facilities for southern crested grebes.

Queenstown Lakes Mayor Lyal Cocks said this week he was keen for the council to work with the developers as plans were made for new car parks and other facilities at the northern end of Roys Bay.

Mr Cocks said fill taken from the apartment site could be used to reclaim land needed to extend the marina car park.

''It would be ideal to be able to just move it across the road rather than cart it out of town.''

Council recreation planners were working on other improvements for cyclists, pedestrians, skateboarders and entertainers to the lakefront land, from the marina to the bottom of Helwick St, in the CBD, Mr Cocks said.

The concepts would be put out for public feedback, he said.

The newly adopted Wanaka Lakefront Reserves Management Plan gives priority in the marina area to ''facilities that benefit and remain accessible to the local community''.

Mr Cocks said improvements being considered would include the creation of a ''sanctuary'' for grebes, which have become something of a tourist attraction.

The apartment development was ''very positive'' for Wanaka.

''It's a good site and it will be good to see a good development on that site.''

The apartments would add to the town's supply of upmarket accommodation ''and we could always do with a bit more of that in Wanaka''.

Lake Wanaka Tourism general manager James Helmore said he understood apartments in the Marina Tce complex could be rented out by their owners.

''In that regard it's fantastic.

''It's good to see some additional accommodation inventory coming online.''

He understood ''a handful'' of other new accommodation projects were under way or being planned, but he could not be more specific.