Case of the missing Culloden tartan 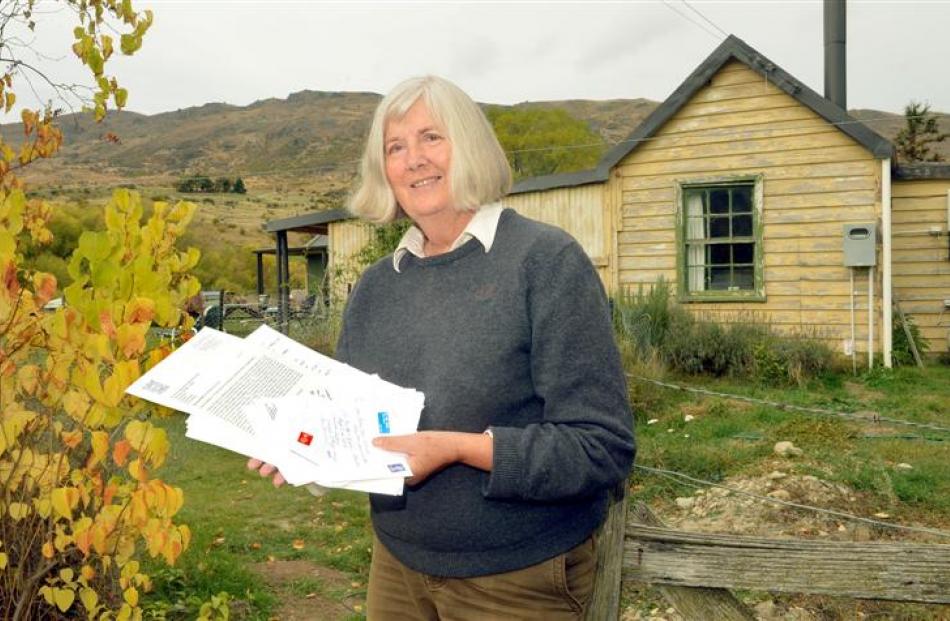 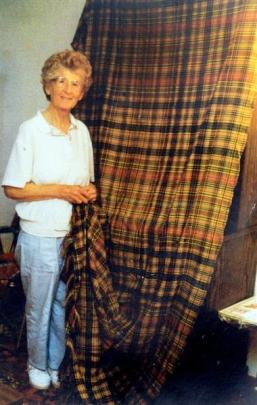 The ancient cloth, held by her late aunt, Alice.

This is the tale of an ancient tartan cloth gone missing. It is set in a 500-year-old Scottish castle, and the players include a Scottish Lord, an elderly maiden aunt and Robyn MacIntosh-Handtschoewercker, of Cardrona. The action is said to have begun at the battle of Culloden, Scotland, 270 years ago. Mark Price reports.

Robyn MacIntosh-Handtschoewercker says her hands shook the day she touched the Ogilvy plaid.

That was in Christchurch in 1998 when she packed it up to send it off to the family's ancestral home in Scotland for safe-keeping and public display.

She remembers it was taller than a tall man; coarse to the touch, but light and finely woven from sheep's wool; and coloured with vegetable dye in the Ogilvy tartan.

''It was a beautiful bit of weaving.''

Mrs MacIntosh-Handtschoewercker believed it was at least 262 years old.

She handed it over to a courier and watched a piece of Scottish taonga begin its journey back to its rightful home, at Cortachy Castle, near Dundee.

The intended recipient was the head of the Ogilvy clan, Lord David Airlie, who resided in the 500-year-old, 90-room castle.

Lord Airlie, in a letter to Mrs MacIntosh-Handtschoewercker in 1997, promised to take ''the greatest care'' of the plaid.

He suggested it might be placed alongside the dress worn by a former Lady Ogilvy when she attended the ball given by Charles Stuart, prior to his march into England in 1746.

The provenance of the plaid is unclear, but Mrs MacIntosh-Handtschoewercker felt this offer established that it would be treated as a highly-valued clan artefact.

The plaid was delivered by courier into the hands of the butler at Lord Airlie's castle.

That much Mrs MacIntosh-Handtschoewercker has established.

She has a letter from Lord Airlie himself saying he had received it.

''I am truly grateful to you for allowing this historic plaid to be returned to the head of the family and I can assure you that it will be well looked after, not only by myself but by my successors,'' the letter said.

The importance of the plaid to Scottish history centres on the Battle of Culloden.

The history books show Charles Stuart - who later became known as Bonny Prince Charlie - was trying to regain the throne of England, Scotland and Ireland for the Stuart family.

His Jacobite uprising was backed by Scots and Catholics but came to an end in a hail of musket and cannon fire at the Battle of Culloden on April 16, 1746.

It was part of Mrs MacIntosh-Handtschoewercker's family understanding that their ancestor, John Ogilvy, was a supporter of Bonny Prince Charlie and wore the plaid prior to the famous battle and the defeat of Charlie's Jacobite army.

After the battle, Jacobite supporters found themselves in considerable danger from the victor, the Duke of Cumberland, who became known as ''the Butcher''.

John Ogilvy escaped to France and his plaid disappeared from sight.

Mrs MacIntosh-Handtschoewercker says it resurfaced in the 1800s, at a time when wearing a plaid had become the fashion, and was worn by an ancestor presented to Queen Victoria.

Eventually, it came to New Zealand as the result of some complex family issues, and was placed in a bank vault in Invercargill for safe-keeping.

It remained there for three generations.

The plaid's final New Zealand connection was with Mrs MacIntosh-Handtschoewercker's late aunt Alice Ogilvy MacIntosh, of Christchurch, who did not marry and had no children to hand it down to.

In her later years, Miss MacIntosh decided it should be sent back to Scotland.

At that point, relations with Lord Airlie were ''quite cordial'', Mrs MacIntosh- Handtschoewercker said.

In 2007 she informed Lord Airlie she intended to visit the castle, and that was when she learned the plaid was missing.

Lord Airlie wrote: ''I well recall receiving an Ogilvy tartan plaid some years ago and placing it carefully in one of the many cupboards in the castle.

''You will appreciate the castle is large with numerous cupboards and as I write, and after a search, I cannot be sure which of many tartan plaids placed in the castle is the one in question.''

There was further correspondence, and in April last year a letter from a representative of Lord Airlie seemed to indicate all was well at last.

''... the plaid has been found safe in the linen store.

''It had lain there undiscovered due to someone placing a curtain on top of it.''

But when they arrived at the castle they were presented instead with a box containing the photos of the plaid she had taken in Christchurch and a silk scarf in the Ogilvy tartan.

Authority member Brian Wilton MBE, confirmed the visit to the ODT and that the plaid had not been found.

''If examination of the plaid by our experts had been possible and had shown that it was contemporaneous with the Battle of Culloden, then it would have been of immense value from the historical side as being the only known plaid that had survived the battle.

''It would certainly have been one of the star attractions of the planned new National Tartan Centre.''

Mr Wilton said there had been many claims of plaids having been worn at Culloden but none had been found to be true.

Lord and Lady Airlie have now vacated the castle and despite a room-by-room search, the plaid has not turned up.

Mrs MacIntosh-Handtschoewercker says she was left with a dilemma - should she do nothing, or should she kick up a fuss?''We could just roll over and forget about it.

After careful consideration, she decided to make a fuss.

She has contacted the Scottish Police and the Scottish media, and is preparing a video ''lament'' for the plaid she will post on YouTube.

She is awaiting developments.

Lord Airlie has not yet responded to an ODT email.

• The pattern of interlocking stripes called a tartan is often mistakenly known as plaid.

• Plaid actually comes from the Gaelic word for a blanket, and is specifically used in the context of Highland dress to refer to a large length of material.

• The original kilt was known as the ''belted plaid'' and consisted of a length of cloth (basically a large blanket) that was gathered and belted at the waist.

• The plaids were most often made from a tartan cloth, and so the confusion between the two terms is understandable.