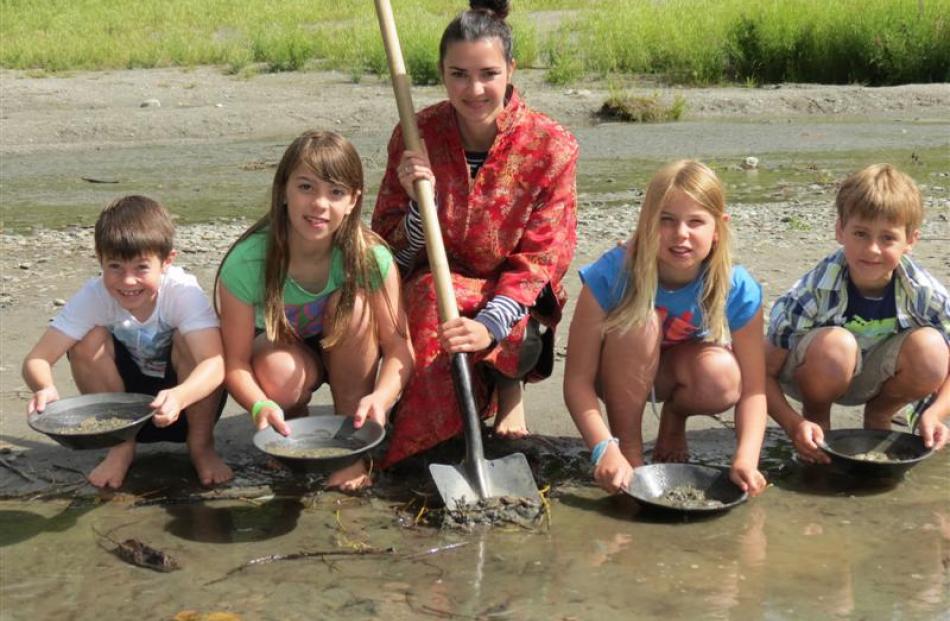 Lakes District Museum education officer Amy Taylor practises gold panning in the Arrow River with (from left) Cameron Spicer (7) and Emily Spicer (10), both of Quail Rise Estate, and Amelia Peasey (10) and Sam Clark (10), both of Arrowtown, on Thursday...

Chinese New Year and how it relates to Otago's history will be brought home to Wakatipu children when they celebrate the start of the Year of the Horse at the Lakes District Museum.

After morning tea, the group will explore the nearby Chinese settlement from 10.45am to noon.

The children will try their luck gold panning in the Arrow River between 2.30pm and 3.30pm.

They end the day with afternoon tea, a colouring competition and watching the New Zealand drama Illustrious Energy (1988), about prospecting for gold in 1890s Otago.

Up to 20 children aged 6 to 13 will be able to participate on a first-come, first-served basis.

• Other events include: Sign of the Times, memorabilia and autographs from past and present stars of entertainment, sport, politics and literature; until February 24.

Shadows of Shoah uses photography, music and episodes from survivors' experiences to communicate the significance of the Holocaust; August 28 to October 13.

The War to End All Wars demonstrates the effects of World War 1 on people in Wakatipu. It features photographs, diaries, telegrams, oral histories and newspapers; November 11 to April 25, 2015.

Our Lost War Passchendaele, a film exploring the history of Private George Salmond, who was among the 2700 New Zealand casualties of the battle of Passchendaele, in 1917.