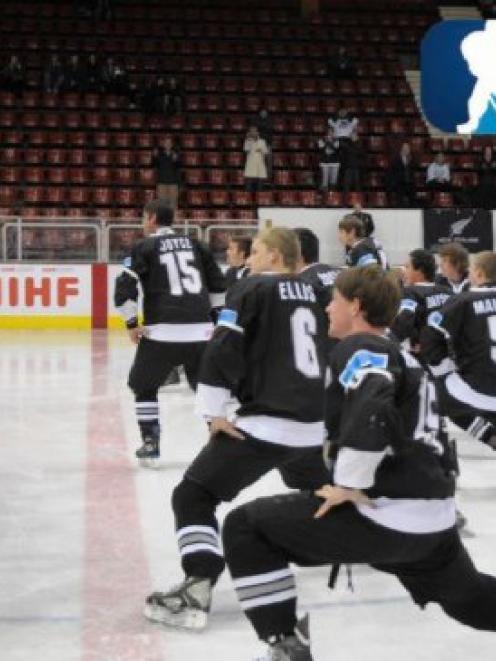 The New Zealand Under-18 National Ice Hockey Team performs a haka on ice before its International Ice Hockey Federation World Under-18 Championship match against South Africa in Sofia, Bulgaria, on Thursday. Included in the team are Queenstown youths Callum Burns, Lachlan Frear and Maxwell Macharg, all of whom scored a goal in the team's 18-0 drumming of South Africa. Photo supplied.
A trio of Queenstown residents are part of the New Zealand team gunning for a third division gold medal at the International Ice Hockey Federation World Under-18 Championships in Bulgaria.

Queenstown youths Callum Burns (15), Lachlan Frear (15) and Maxwell Macharg (16) all scored one goal apiece, with Callum also earning points for an assist in the emphatic win.

If the team wins its match against Chinese Taipei early this morning, it will guarantee at least a silver medal and a spot in the gold medal show-down with Belgium on Sunday.

Lachlan's mother, Luana Frear, said excited parents across the country had been rising at 1am to stream footage of the games online, and shared snippets of breaking news after coverage of the South Africa game was cancelled in favour of a big Bulgarian basketball match.

"I spoke to Lachlan on Skype last night and he was just loving it and just so excited," Mrs Frear said on Friday.

"They performed the haka on ice and the European crowd were just blown away with it and the South Africans were trying to take videos, even if the Bulgarians were intimidated by it," she said.

Callum's mother was travelling with the team, she said. The Machargs, who were attending a conference in the country, were also there.

The team was competing under the watchful eyes of head coach Jonathan Albright and assistant coach and Stacey Rout, formerly of Queenstown.