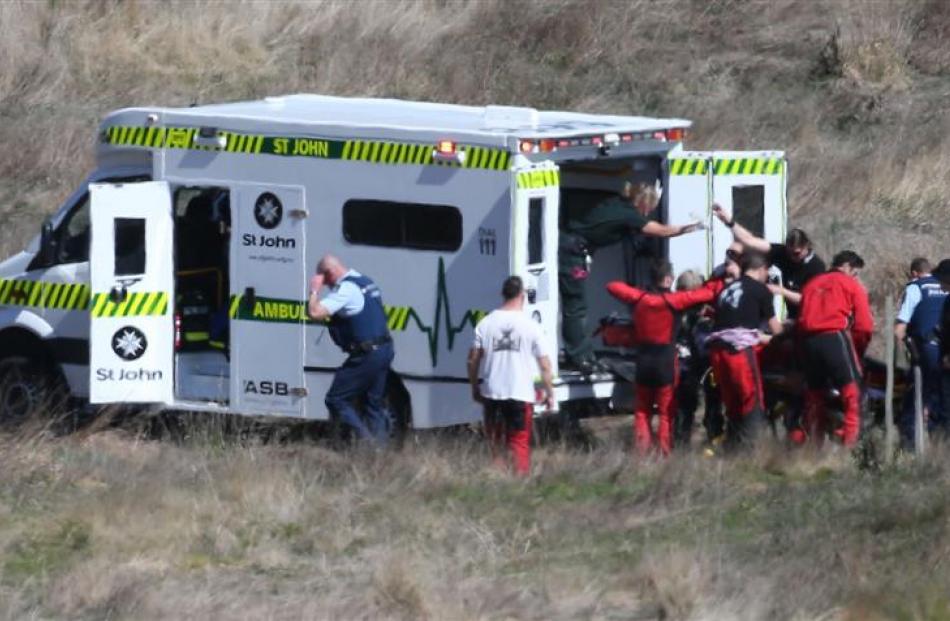 Paramedics, police and NZONE Skydive staff at the scene of the accident near Jack's Point yesterday. Photo by Blair Pattinson

He was taken to Lakes District Hospital in Frankton by ambulance before being transferred to Dunedin by helicopter.

NZONE Skydive business development manager Derek Melnick told the Otago Daily Times a cameraman accompanying a group of customers on a skydive about 1pm suffered multiple injuries after a parachute ''malfunction'' caused him to land heavily.

He was skydiving solo and no customers were involved in the incident, Mr Melnick said.

''He is one of our senior crew members, with a number of years' experience.''

The company's operations have been suspended.

Paramedics from two ambulances were seen treating the man for about 45 minutes in a paddock on private property only a few hundred metres from the company's airstrip and skydive landing zone near the Jack's Point residential subdivision.

Mr Melnick later said in a statement the skydiver initially had a ''gear malfunction'' when opening his parachute but appeared to regain control of it. However, in the last 180m the parachute ''became unstable'' and he entered into a spin.

''The cameraman was unable to completely bring his canopy back under control to follow a standard landing procedure, causing him to impact the ground at speed ... he sustained multiple injuries,'' he said.

Reports had been filed with the safety director of the New Zealand Parachute Industry Association and the Civil Aviation Authority, he said.

It is the first serious skydiving incident in the Queenstown Lakes district since 2012, when Italian skydiving photographer Antonino Arillotta died near Wanaka Airport after his main and reserve parachutes malfunctioned.