Of moose and man: new tech but hope fades 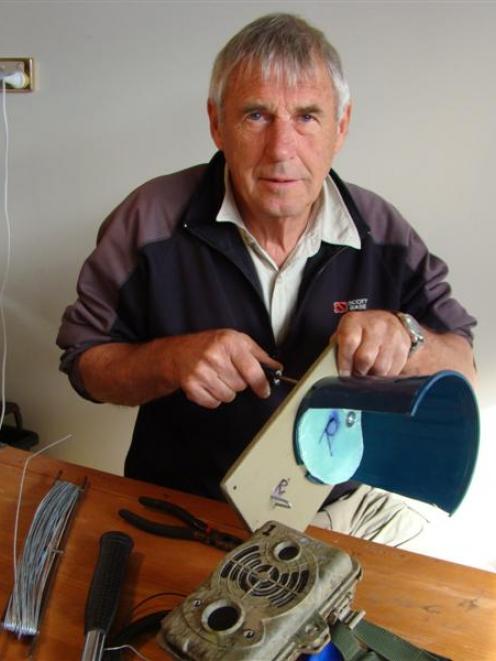 Ken Tustin pest-proofs another set of cameras bound for installation near Doubtful Sound next month in the hope of capturing photographic evidence that North American moose still live in Fiordland. Photo by Marg Tustin.
Moose hunter Ken Tustin is about to deploy updated technology in his bid to capture evidence of the fabled Fiordland moose, despite growing feelings the search may be in vain.

The 67-year-old biologist began putting cameras in the bush in 1994 in the hope of photographing descendants of the North American moose released in Fiordland in 1910.

Cameras were last installed in 2008, when 13 motion-sensor digital cameras with infrared flash were set up on animal trails near Herrick Creek and Henry Burn, near Dusky Sound.

The cameras were now ''well past their use-by date'' and needed to be replaced, he said.

But nearly 20 years after installing the first cameras, Mr Tustin said he was beginning to doubt whether the project was worth continuing.

''The job is getting harder and harder because there is quite a build-up of deer in Fiordland now and the forest is opening up, which creates more trails to choose from.

''It's becoming harder to know where to put the cameras. Sometimes, it's difficult enough to decide which side of a tree to put one on.

''I was tempted to flag the mission, but we know far too much about the animal and the use of cameras to give it away so easily.''

His main motivation for continuing was the addictive thrill of the chase and the fear of regret, he said.

''I'd hate to end up in an old folks' home thinking `Gosh, if only we had just done it for one more season' ...

He had received much support for the project in the form of sponsorship to buy new cameras, Mr Tustin said.

The latest are BF-7s made by Canadian manufacturer Spypoint, which are much more compact and durable.

The cameras were powered by six AA batteries, provided better-quality digital photographs, could hold more photographs and had a better trigger distance, he said.

''They also have black flash which is invisible - the animals won't even know they've been photographed.''

He hoped to install them early next month, again on animal trails near Herrick Creek and Henry Burn.

The last known photographs taken of moose in Fiordland were taken by Fred Stewardson, of Hikurangi, in Northland, who took the photographs on a hunting trip to Wet Jacket Arm in 1953.

His older hunting companion, friend and mentor Eddie Young, swore him to secrecy about the photos for many years, fearing the moose would be shot by hunters if the photographs were revealed at the time. Only a handful of photographs of moose in Fiordland are known to exist, most taken between 1923 and 1952.