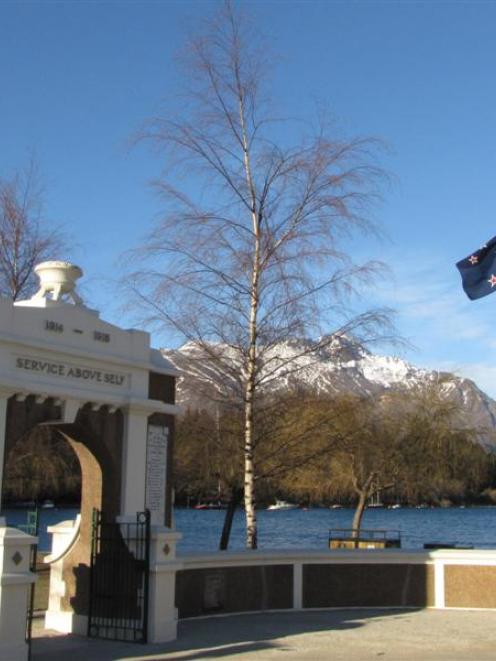 The New Zealand flag at the Queenstown Memorial Gates is often flown at half-mast in recognition of nationally important events, such as (photographed) in August 2011, in honour of New Zealand SAS soldier Corporal Doug Grant, of Linton, who died during an operation to rescue hostages in Afghanistan. Photo by James Beech.
Presidents of the Queenstown and Arrowtown Returned and Services Associations (RSA) say changing the existing flag of New Zealand has not been discussed by any of their members.

The presidents were asked to comment after Prime Minister John Key said he planned to discuss a new flag with senior ministers and possibly put the matter to a referendum as part of the election this year.

Queenstown RSA president David Geddes said there had been ''no discussion whatsoever'' among members about the proposal.

''I've seen this before and nothing has ever come of it in the past and I would be surprised if anything came of it on this occasion,'' Mr Geddes said.

''I'm not aware, from my day-to-day dealings with a cross-section of the community, of any great desire to change the flag.

''We have this unofficial one of the white fern on a black background, which we probably all have used at some stage as an unofficial way of identifying our Kiwiness, but in a formal sense I sense no real desire to change it.''

Arrowtown RSA president John Lindsay said members had not discussed changing the flag and so could not give a consensus opinion, but he personally was not dissatisfied with the present flag.

As well as providing opinions for and against a new flag, some readers questioned the timing of Mr Key raising the issue when the country faced more pressing concerns.

Other readers noticed how often the debate coincided with Waitangi Day.

Sue and Bill Thomson said: ''Leave our flag alone. It is part of who we are and we should be proud of it.''

They were supported by Dale J. Wedlock, who asked why the Government would ''change a flag when many of our fallen have died wearing it on their uniform, or in their hearts''.

''To change is now would be a disservice to them.''

However, Christine Philip said: ''It would be nice to get a distinctively Kiwi flag. Canadians and South Africans coped when they changed their flags. I'm sure we can, too.''

Grant Yockney said New Zealanders ''are already identified around the world by the Silver Fern, particularly in the sporting arena - give us our true identity and make the NZ flag the Silver Fern.

''Yes, we fought under the current flag - that history will still be remembered.''

Anna Trent was clear in her view: ''Get rid of it. Looks too much like the Aussie one.''