Why Kiwis fly when 'roos can't 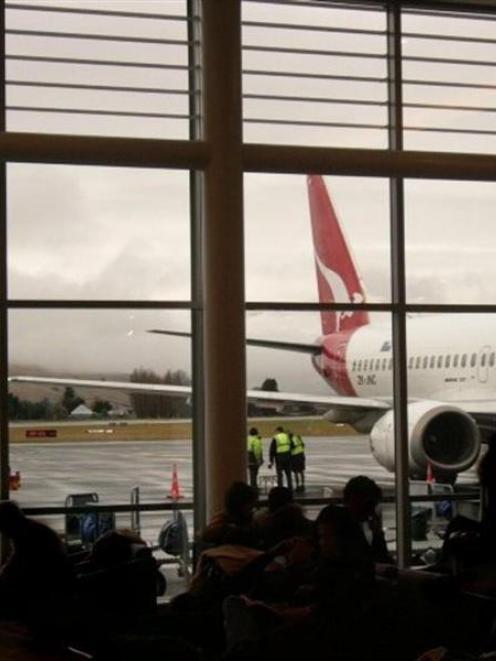 Qantas' failure to have RNP technology on board at Queenstown airport means its stays behind in poorer weather conditions. Photo by Tracey Roxburgh.
Cloud, rain and snow - all things that bring dread to the heart of a Qantas passenger booked to fly from Queenstown Airport.

With visibility minimal and a deafening silence filling the airport's airspace, the departures board takes on a slightly mocking tone.

Qantas Airways flight QF2782, due to zip from the resort to Christchurch in just 45 minutes, has just turned into a bus.

It could take seven hours to get to Christchurch, if we all left now, but it won't.

Dejected passengers stare at the dreaded word - cancelled - that has appeared on the screen next to their flight.

Cellphones are out, calls are made and text messages sent, rearranging plans for holidays, dinner parties - or just getting home in time for work.

Two little girls travelling alone shed tears and pass their phone to the nice lady behind the desk, whose job it has become to explain to worried parents what is happening.

The Qantas queue is a slow shuffle - pick up bag, take a step, put down bag, wait - all the while staring intently at the desk's two staff.

One is on the phone, the other arguing with an irate customer who doesn't quite get it.

But why do Air New Zealand's check-in staff seem slightly happier? Their passengers seem slightly smug too, as their queue moves, their bags are accepted and their boarding passes issued.

There's no cancelled beside their flight number on the departure board. In fact, it says boarding.

Airport staff assure the Qantas queue there is snow on the Remarkables and more on the way, pointing to the wall of grey cloud approaching from the southwest.

Nothing will be taking off today, they say. Best bet is a bus or a bed for the night. Try again tomorrow.

It certainly looks evil outside.

It's an Air New Zealand flight bound for - you guessed it - Christchurch.

Its lucky passengers will be landing in 45 minutes, while we Qantas flyers will be lucky if our bus rolls out of the terminal car park in an hour.

Once on the road, it's a mere eight hours' drive to Christchurch - over the Lindis Pass, a quick 30-minute stop in Omarama, followed by more endless highway, a 20-minute coach swap near Lake Tekapo, more highway, and a bathroom break and caffeine fix in Geraldine.

There's DVDs to watch, of course - The World's Fastest Indian (seen it), on the first leg, and Whale Rider (ditto - about a million times) on the second.

Eventually, we roll into Christchurch, city streets in darkness and no change given from 6.30pm.

Up and down the bus, plans are all but ruined.

And all of this begs a very obvious question - how does this happen?Why is it Air New Zealand passengers flying the same route, from the same airport, in the same conditions, in the same sort of Boeing, get what they paid for and why are we rolling in to town eight hours later, on a bus with one baby loudly voicing the opinions of all on board?

And why - oh why? - did I choose to fly Qantas at all? It's not the first time this has happened.

Part of the answer is fairly obvious - money.

I took the risk, tried to save a small amount of cash, and ended up on a bus. Shame on me.

The other part may also be to do with money.

It involves Required Navigation Performance Operations (RNP) technology, and the fact that my Qantas flight didn't have it.

Air New Zealand's flight did, and the results were fairly obvious.

RNP is a piece of technological wizardry which allows aircraft and their crews to operate in poorer weather conditions than otherwise, taking off and landing when once they wouldn't have.

Air New Zealand installed the technology on its aircraft last year and has since provided a more reliable service to and from Queenstown airport.

Disruptions - which had occurred on average 36 days each year - have dropped significantly.

Qantas, on the other hand, uses it on transtasman flights linking the resort with Australia's east coast cities, but not as part of its domestic services within New Zealand.

Perhaps not surprisingly, Qantas staff are evasive when asked about RNP.

The airline's New Zealand regional general manager, Grant Lilly, of Auckland, issued a short statement through a Sydney-based spokeswoman on Monday: "Qantas is committed to introducing RNP technology for its New Zealand domestic operations and is currently on track to implement the technology, pending regulatory approval," it read, in full.

The spokeswoman, Christie McSweeney, refused to elaborate when contacted - Mr Lilly was not available for an interview, she said, and no, she couldn't give a timeframe for the introduction of RNP on the airline's domestic service.

The airline needed the approval of the Civil Aviation Authority to operate RNP approaches on its domestic routes, which involved a series of trials, equipment tests and observation by CAA inspectors.

"As soon as we have something further to announce, you will be the first to know," she said.

Mr Lilly also refused to discuss RNP on the record when contacted in his Auckland office yesterday, despite repeated questioning.

Air New Zealand statistics, obtained by the Queenstown Times on Monday, showed that since the middle of last year, 45 flights had landed or taken off using RNP, when previously they would have been disrupted.

The results were clear for all to see last Friday.

Two Qantas flights were cancelled, with 85 passengers sent by bus to Christchurch and others re-booked for the next day's services.

A third Qantas flight, carrying 117 passengers bound for Queenstown, was diverted to Invercargill and passengers reached the resort by bus.

As for Air New Zealand? "We were flying all day," Mr Unno said.