The women behind a Central Otago charity which supports people with disabilities were brought to tears in Queenstown after being announced winners of the inaugural Wakatipu Impact100 grant.

The philanthropic venture, supported by the Wakatipu Community Foundation, has 100 women each donating $1000 to the main fund, the total of which is granted to one charity or not-for-profit after a vote by members.

The latter received the nod from the Impact100 members, which Living Options operations manager Olivia Wildey said was "absolutely life-changing".

The trust was established in Alexandra 20 years ago because people who had a disability there had to relocate to cities where there was support. 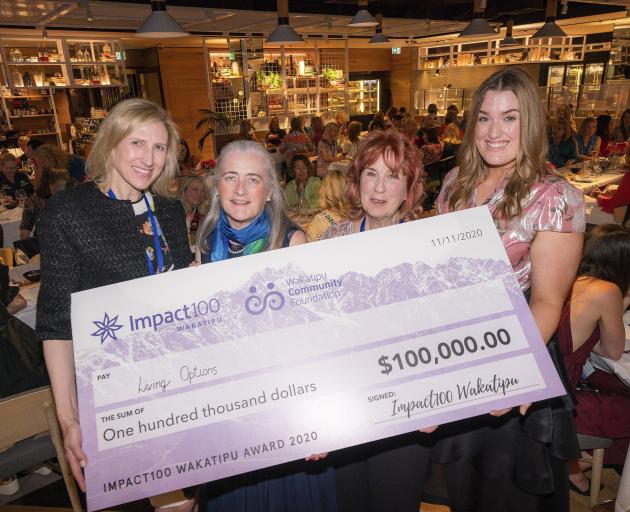 It now wanted to recreate the service in Wakatipu, where Miss Wildey said the present situation was no different from that in Central Otago two decades ago.

The money would be used to fit out a home at 14 Nairn St, which the Queenstown Lakes District Council had leased to the trust for 10 years, at a peppercorn rent of $1 a year.

The trust also planned to employ art, swimming and music tutors and contact clinical psychologist Olive Webb to work with families and staff.

Already the trust was working with 10 families from the Wakatipu at its Alexandra hub, but knew of at least another 10 needing support.

"Three of the families we’re working with now were going to have to move out of the area to get what they need."

Along with providing support direct to people with disabilities, Living Options also supported their families.

"It’s very hard for families to even work their way through the system — where do they go, who do you ring?"

Ms Wildey said seven people from Wakatipu had already been employed by the trust and were training in Alexandra.

"We’ve got a [former] bungy jump master, someone else from the bungy office, a couple of people from the skydiving industry ... these people had touched on this area previously in their lives and they’re now happy to return to it, and they’re really, really good at it — it’s great."

Impact100 Wakatipu founder Kristen Holtzman said the chapter was in the top 10% of the 63 chapters internationally in its inaugural year, having raised $151,000 — next year she hoped to raise enough for two $100,000 grants.

Each of the runners-up this year also received a $5000 grant.