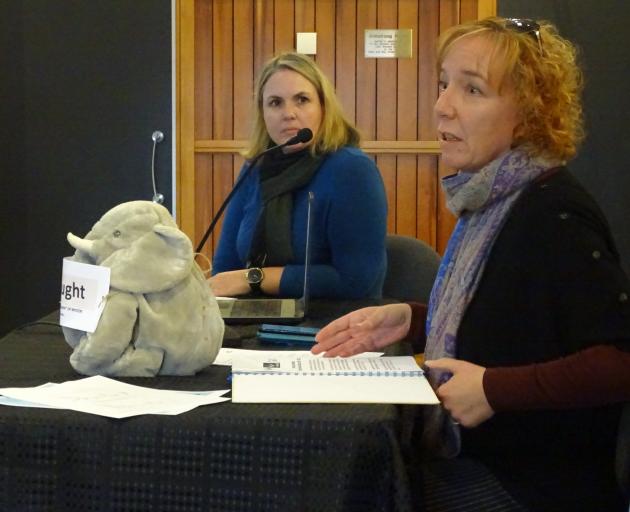 Accompanying Lake Hawea Community Association chairwoman Cherilyn Walthew (right) and her personal assistant Danni McConnell during their submission at the Upper Clutha draft Queenstown Lakes spatial plan hearings in Wanaka yesterday was a soft toy elephant with the name tag Herr Paught. PHOTO: KERRIE WATERWORTH
Queenstown and Upper Clutha residents have had their say on the plan which will guide land use in the area for the next 30 years.

Two days of hearings have been held on the Queenstown Lakes District Council spatial plan.

In Queenstown on Monday the plan was criticised for taking a neutral stance on the future of Queenstown Airport and high visitor growth projections.

Speaking at a hearing on the draft plan in Queenstown on Monday, Queenstown architect David Jerram said its major failing was assuming the airport would continue operating at its Frankton site in tandem with a future jet-capable Wanaka Airport.

That left few options for development in the resort other than intensification along its arterial routes, which was a "traffic disaster", Mr Jerram said.

"This is crazy, when we’re about to spend umpteen millions resolving the very same problem, diverting traffic away from our current main centre."

Mr Jerram is a member of another submitter on the plan, FlightPlan2050, a group that wants the airport to be closed to fixed wing aircraft, and supports the establishment of a new airport at Tarras.

Kelvin Peninsula resident Kirsty Sharpe said Frankton should not be dominated by the airport, and the plan was remiss in not addressing the possible effects of the airport proposed for Tarras.

The high growth in visitor numbers projected in the plan reflected pre-Covid times, and a growing awareness around the world of air travel’s contribution to climate change meant it was "a nonsense to expect that business will return to normal", Mrs Sharpe said.

Arrowtown businessman Simon Spark said a shortage of land for commercial use was squeezing out local businesses through ever-increasing rents.

"Until we actually discuss the issue of the airport [the elephant in the room] we cannot truly establish the needs of our community," Ms Walthew said.

As the council had not consulted with the community over the future of Wanaka airport, in its current form the spatial plan was not fit for purpose, she said.

Developer Mike Garnham told the hearing the council needed to put a lot more staff and resources into planning, consultation and forethought into Wanaka’s future growth.

"If the council and its district plan does not deal with that, you will get it anyway ... developers like me will impose it on you by making applications and going to court.

"But that produces an ad hoc result," he said.

The draft plan, intended to a guiding document for the district over the next 30 years,

is expected to be adopted by the council next month and take effect on July 1.