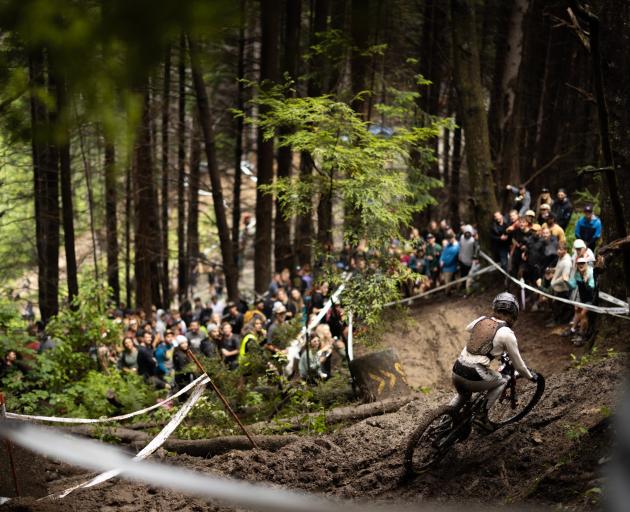 A dodgy weather forecast meant the Queenstown Pump Track competition — held on the Queenstown Mountain Bike Club’s new Kerry Dr track — was brought forward to Friday, when a total of 64 riders tackled the maze, including 40 pros, 14 CWNEXT riders and 10 amateurs.

The pro finals were livestreamed by Crankworx to its global audience, securing the South Island’s growing status as a premium mountain biking destination.

New Zealand’s Tuhoto-Ariki Pene, of Te Arawa, and Billy Meaclem, of Christchurch, battled it out in the men’s pro final, with 20-year-old Pene bringing the pace and consistency to secure his first Crankworx win, with Bas Van Steenbergen (United States) in third.

The women’s pro was won by Kialani Hines (United States) with Caroline Buchanan (Australia) in second and young Kiwi rider Jenna Hastings, from Rotorua, in third — her fifth podium finish on the trot.

The weather rolled in for Saturday’s Queenstown Downhill event, held at Skyline’s Queenstown Bike Park, with riders covered in mud as they reached the finish line.

The track combined some of the best downhill trails at Skyline, with some freshly-cut sections, and plenty of roots, rock gardens and rock rolls testing even the most seasoned pros.

Queenstown-based pro Louise Ferguson, originally from the United Kingdom, pulled off an epic win in the women’s pro category in 3min 49sec — a result that surprised her on the "spicy" track.

"I actually crashed and by the time I came down I had had a good run, but with the crash I just thought it was going to be a bit of a chiller and all the other girls were going to come down and take the hot seat, but yeah, it was good," she said.

Crankworx moves to Cardrona Alpine Resort for the air downhill on Thursday and finishes at Bike Glendhu, in Wanaka, on Saturday and Sunday where the dual slalom will be held, the latter also being livestreamed by Crankworx.