Prime Minister Jacinda Ardern will host Australian counterpart Scott Morrison in Queenstown for their annual meeting at the end of the month.

Ardern made the announcement at her post-Cabinet press conference this afternoon.

The key focus of the meeting will be the Covid-19 recovery, as well as regional and security issues, she said.

The last meeting they had was in February last year, the day of New Zealand's first Covid case.

Strong and successful responses on both sides of the Tasman had enabled the world-leading travel bubble, she said.

It will be a "milestone and a pleasure" to resume discussions face-to-face, she said.

Topics will include regional pressures, including climate change and geo-strategic issues.

Speaking ahead of an immigration announcement this evening, Ardern said they were looking to shift away from attracting low-skilled to high-skilled migrants.

Over the next 12 months they were expecting about 220 investors to arrive.

Ardern has previously used such meetings to press home her dissatisfaction with Australia's 501 deportation policy.

Regarding Morrison's visit, Ardern said they had always been transparent about "difficult" issues in the relationship.

They always discussed those when they popped up, she said.

So this meeting was more about where to next for the relationship, she said.

"I expect it to be a very practical meeting."

Ardern may also seek an update on Suhayra Aden, the former Australian-New Zealand dual citizen alleged by Turkish authorities to be an Islamic State terrorist. Australia revoked Aden's Australian citizenship, prompting a sharp rebuke from Ardern for abdicating its responsibilities to its citizens.

Both countries' relationships with China are also likely to be discussed.

This follows questions over whether New Zealand's stance on China is soft due to a reluctance to upset its biggest trading partner, and why New Zealand has been absent from some Five Eyes' statements critical of China limiting Hong Kong elections.

New Zealand has at times joined the Five Eyes' statements, and other times spoken out on the Hong Kong issue by itself.

Foreign Minister Nanaia Mahuta has said that she was "uncomfortable" using Five Eyes to comment on non-security matters.

Payne also did not push for New Zealand to take a stronger line on China, saying she had learned "not to give advice to other countries".

She said Australia's stance on China has offered "clarity, consistency and confidence", which has contributed to the security and prosperity of the region.

Morrison, accompanied by his wife, will arrive in Queenstown on May 30 and talks will take place the following day.

Ardern and Morrison will engage with Australian and New Zealand business, tourism, and community leaders, and lay a wreath at the Arrowtown War Memorial.

Mr Morrison would also go to the Highlanders vs Rebels Super Rugby Trans-Tasman game being held in Queenstown on the afternoon of May 30. 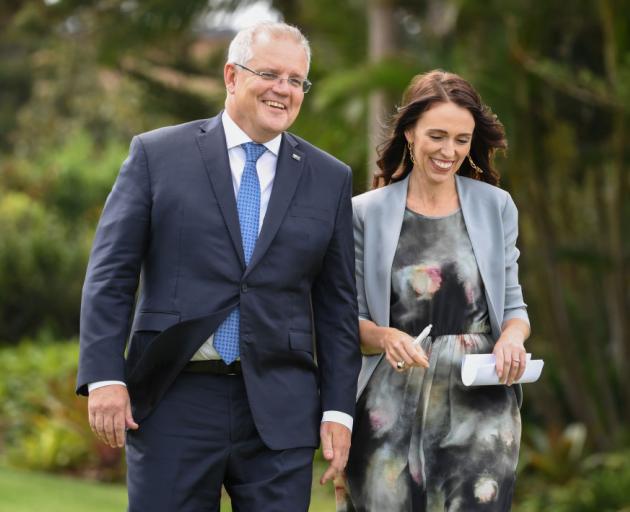 "I'm looking forward to welcoming Prime Minister Morrison back to New Zealand following a difficult year for both our countries through the pandemic," Ardern said.

"Our relationship with Australia is our closest and most important and this has never been more evident than in these trying times for the world."

She said the visit was an opportunity to celebrate the transtasman bubble.

"An in-person Leaders' meeting reflects a significant achievement for both our countries and is highly unusual in the Covid-19 context."

On Thursday the Government will unveil its spending priorities for the coming year in Budget 2021.

Regarding the Budget, Ardern said it was about making sure New Zealand came out of Covid stronger than when coming into it.

The economy had performed better, unemployment better than expected, all due to "careful" management, she said, and that would continue.

The immigration announcement was about looking at what New Zealand's needs were, she said.

New Zealand had the highest reliance on temporary workers in the OECD.

"We need to move away from relying on overseas labour to support our economy."

The immigration reset was not about "crude numbers" but the outcomes New Zealand - and those coming here - were after, Ardern said.

For too long New Zealand's reliance on a low-paid workforce as not working for them or New Zealand, she said.

Asked about RSE workers specifically, Ardern said this would not be touched.

That was not just about labour shortages in New Zealand, but providing opportunities for people in Pacific islands countries.

Today's Cabinet meeting also comes on the first day of the quarantine-free travel bubble between New Zealand and the Cook Islands.

The first flight to Rarotonga will touch down tomorrow, and there will be daily flights between the two countries after that.

Ardern said the Cook Islands bubble was another step in the recovery process, offering the chance for families to reconnect, help businesses and give some a "well-earned break".

Regarding the Cook Islands bubble, if there was a Covid case it would likely have originated from New Zealand. That was why it had been a cautious reopening as it would be New Zealand's responsibility to assist with any potential outbreak there.

That could lead to New Zealand bringing people back here to relieve pressure, she said.

This would also apply to Cook Islanders themselves, as per New Zealand's current arrangements and "expectactions" to provide urgent care when required, she said.

Ardern has also been pressed recently on New Zealand's position on the escalating conflict between Israel and the Palestinians.

In just seven days at least 188 Palestinians have been killed in Gaza, including dozens of women and children, and 10 people killed on Israeli soil.

New Zealand continues to support a two-state solution, one for Israelis and one for Palestinians, with Jerusalem as the capital for both states, but the latest fighting was pushing that outcome "further and further away", she told 1News today.

"So long as you have the threat of evictions of Palestinian families, and so long as we have in response from Hamas indiscriminate rocket fire, and then so long as you have Israel responding to that with a response that goes beyond self-defence when you start seeing the death of women and children, then we move further and further away from that two-state solution."