A band of three black labradors are now blood brothers for life.

Four-year-old Argus was saved thanks to two blood transfusions from two young labs, Pike and Mako – and the determination of many people to keep him alive.

The Queenstown dog was flown to Auckland for surgery but it was touch-and-go whether he’d survive the ordeal.

About a month ago, on a Sunday night, Argus’ owners Karen Brown and Dave Ness noticed their typically playful pooch wasn’t feeling well.

By the Monday morning, he’d spiralled downhill and wasn’t eating his food.

She raced to Remarkable Vets in Arrowtown, where Argus was deemed severely anaemic.

It’s a symptom of other conditions, leading to a drop in healthy red blood cells. It can be life-threatening and is extremely rare in young dogs.

Argus spent two weeks at the vets while countless tests were done to find out what was causing the anaemia.

Vet Rachel Burt says while they awaited results, the dog’s health gravely deteriorated and he wasn’t responding to medical treatment.

They decided to fly him to specialists at Auckland’s Animal Referral Centre, where a high-tech ultra-sound could be done.

To keep Argus alive long enough to get there, two blood transfusions were needed – and three-year-old Mako, who belongs to Burt’s partner, and five-year-old Pike, who belongs to a client at the clinic, were called to the rescue. 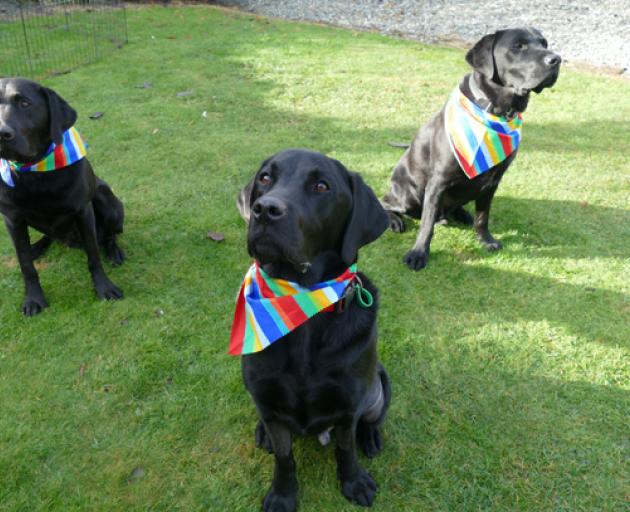 It’s really uncommon to do one blood transfusion for a dog, let alone two, Burt says.

“Absolutely, they saved his life. It doesn’t have to be the same breed – it’s just a coincidence we’ve got three black labs.”

The second transfusion was done right up until Argus was loaded on the plane.

Through advanced imaging, Auckland vets were able to find and surgically remove a tumour from his small intestine.

Since then, biopsy results have been clear, and the plucky pooch is up to his old tricks.

“Even more so because he’s been spoilt by all the amazing vets and nurses,” Brown says.

Grateful is an understatement as to how she feels about the local and Auckland vet staff, Queenstown Airport staff who did everything they could to help Argus get on the flight, and of course the donor dogs.

She’s warning pet owners to double-check their insurance policies pay out during emergencies, so they aren’t caught out when the “big one like this comes”.