'Blown away' by Rotary support 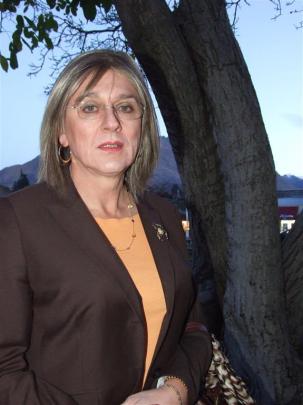 A transgender woman is "blown away'' by the support she has received from Queenstown Rotary Club members after they nominated her as their next president.

Monica Mulholland, who will take on the role in July next year, said just being accepted as transgender had been "huge'' and she never expected to be voted president.

"I've been humbled and brought to the edge of tears by the support I've had from them, the phone calls and emails I've had, the flowers that have been sent to me.''

The service club's members were truly fulfilling its motto of "service above self'', she said.

"They're non-judgemental, and they're here to make life better in the community for everybody.''

Aged in her early 50s, she began going out publicly as a woman in Queenstown in March.

She felt "immense relief'' after suppressing her identity as a woman all her life.

"It's been like a weight around my neck for years and years.

"It's corrosive, it's like acid. It eats into your soul.''

Born and raised in Ireland, she knew from an early age she was different but, like any child, lacked the vocabulary and knowledge to explain her feelings to anyone, she said.

"You just think you're weird.''

Asked what being transgender meant, Ms Mulholland said there were three elements.

Rather than being a "weird lifestyle choice'', the latest scientific thinking was that transgender people were the result of a defective "hormonal wash'' in a foetus during the early weeks of pregnancy.

One of the best decisions of her life had been to tell her wife, Joan, that she was transgender soon after they began dating as teenagers.

Although her coming out as a woman had been a big step for them both, it had been hugely satisfying. "As someone in a privileged position, I think I almost have a civic duty to come out.''

A recent survey in the United States had put the attempted suicide rate by transgender people at 41%.

"These people are killing themselves because they feel there is no other option for them.

"I think it's encumbent on those of us who know we're transgender and are in a position where we're privileged and don't have to take too many risks.

"We can go out and say there are other options to suicide, you can be transgender and you can transition and be president of your Rotary club.''

Earlier this month she released an e-book on Amazon called The Gift of Being Transgender, aimed at addressing the high suicide rate among transgender people.