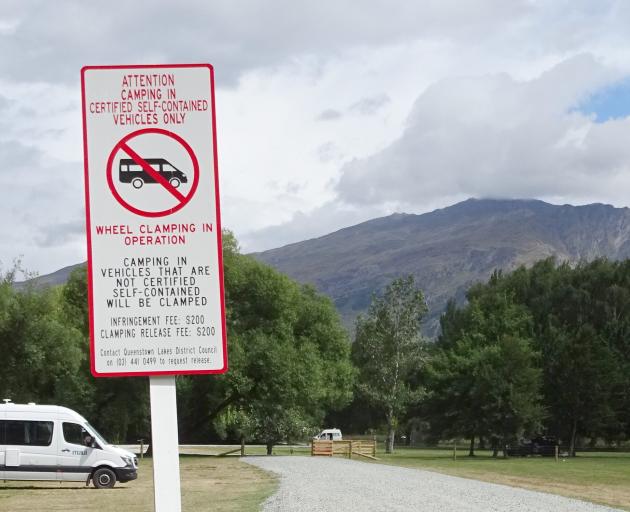 Freedom campers are still camping illegally despite the support of council provided services such as showers and toilets.
Many freedom campers who visited "hubs" in the Queenstown Lakes district over the summer used the free services then camped illegally, veteran holiday park operators say.

Erna Spijkerbosch, who owns or operates six holiday parks in the Queenstown Lakes district, said she still does not understand why the district council provided free showers, toilets and other services to travellers in certified self-contained vehicles.

Many had used the publicly-funded Frankton and Wanaka hubs, then found a "quiet place" to park overnight.

That meant the environment was still suffering.

"Because they're not fully self-contained - even though they've got the sticker - they've still got to poo in the bushes."

The hubs, in Frankton's Hawthorne Dr and Wanaka's Ballantyne Rd, were open daily between 8am to 8pm from November to March.

They also provided free Wi-Fi, rubbish bins and dump stations, and served as bases for "ambassadors" who travelled the district educating freedom campers on how to stick to the rules.

Claim freedom campers taking advantage of hubs
Along with free council-managed camping sites near Kingston and Luggate, they were part of a summer trial funded by $530,000 from an $8.5 million grant from the Government.

The funding round will open on June 1.

Ms Spijkerbosch said Queenstown holiday park operators did not appear to have lost business because of the hub, but their counterparts on the other side of the Crown Range "definitely" had.

Frankton Motor Camp manager Graeme O'Rourke said the Frankton hub had probably taken a "wee bit of the cream off the top" of a good summer season for his business.

Although the educational message may have kept some travellers "out of the bushes", the free services gave them an incentive to avoid staying at camping grounds.

Despite the council's enforcement efforts, there were many "nooks and crannies" where they could get away with parking illegally overnight, he said.

Council community services general manager Thunes Cloete said the purpose of the hubs and camp sites was to provide facilities to campers "whose behaviour might otherwise be causing negative effects on our environment".

"They also played an important role in gathering data and information from campers on how they move around the district."

He said the trial had been a success overall and a "great starting point on our road to addressing the concerns raised by irresponsible camping behaviour".

The number of complaints from the public had declined compared with the previous season.

- The council issued 1843 infringement notices to freedom campers during the past season - about the same number as in the previous summer.