By Matthew Mckew and Gus Patterson
0 Comments
Fire crews responded to callouts across the region yesterday morning, including a car blaze in Queenstown, a chimney fire in Omarama and a power outage in Southland.

In Queenstown, both the driver and passenger made it out of their vehicle unharmed and managed to rescue some of their luggage.

The couple, from Mosgiel, did not want to be named but told the Otago Daily Times they had pulled up at the traffic lights in Stanley St, and when the light turned green, the car did not move.

Smoke could be seen coming from the black 2018 Ford Endura and the pair quickly got out.

Firefighters were called at 9.40am and a crew arrived to find the car well alight.

Fire and Emergency New Zealand initially had trouble extinguishing the blaze underneath the bonnet.

It was -4degC in Queenstown yesterday morning and the water used by firefighters posed an ice risk. 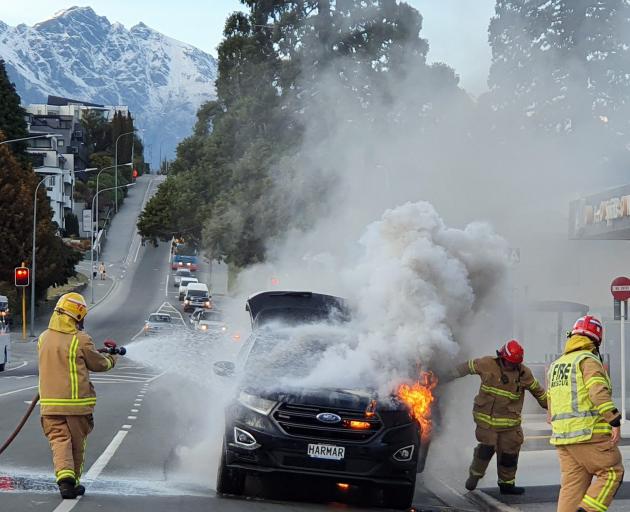 A couple from Mosgiel managed to get out of their car before it burst into flames in Stanley St, Queenstown. PHOTO: MATTHEW MCKEW

In North Otago, it was lucky a fire at the Wrinkly Rams in Omarama was caught in time, its owner said.

James Kerr said when he arrived at work about 6.30am, a truck driver rang in to notify him he could see a fire in the roof.

"If it had happened at 2am it might have been a whole different story."

It had been caused by a blockage in the bar’s chimney, he said.

Mr Kerr said the fire brigades from Twizel, Omarama and Otematata which attended had done a "bloody great job".

They prevented widespread damage and had the fire under control by 11.30am, he said.

Firefighters work to put out a chimney fire in the Wrinkly Rams, Omarama. PHOTO: SUPPLIED

"What made the problem worse was the roof was so frosty and the pitch of the roof meant the men had to use their harnesses to get up there."

Power was cut to residents and businesses in Grasmere, Invercargill, due to fallen lines.

Firefighters arrived at Tanner St shortly after 9am yesterday to ensure the area was safe.

PowerNet engineers were on site to restore power.

Police yesterday appealed for witnesses after a suspicious fire in Fulton St, Invercargill, on Wednesday.

The blaze occurred in a residential property’s garage at 9pm. The garage and its contents were extensively damaged.