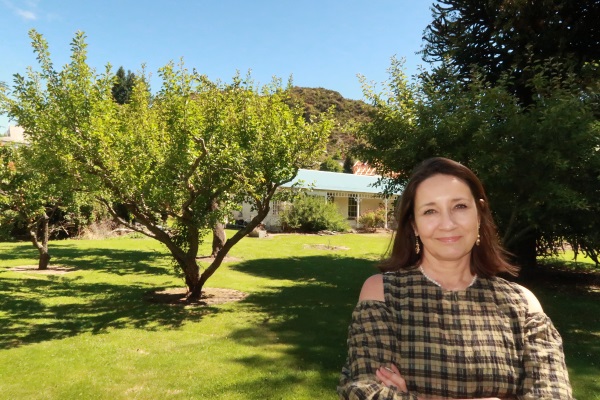 Nadine Conway on the Reidhaven property. Photo: Mountain Scene
Neighbours of an 1866 Arrowtown cottage listed for sale fear a buyer will carve up its heritage orchard for intensive housing.

Reidhaven — last occupied by Arrowtown’s last mayor, the late Jack Reid, and previously his father and grandfather, who were also mayors — also includes about a dozen fruit trees dating back about 120 years.

While Reid was still alive, the property was bought by an Irish billionaire, the late Eamon Cleary, and is nowadays owned by his family trust.

Reidhaven neighbours Nadine Conway and Marion Botherway claim the council allowed this subdivision to be far denser than its ‘residential historic management’ zoning allows, and fear it’s a precedent for developing the orchard.

"Reidhaven is a quintessential part of what makes Arrowtown Arrowtown, and it’s under threat," Conway says.

"There must be some terribly well-off people somewhere who would love an Arrowtown cottage with an orchard."

"If this was owned by the right people, you could turn this into a community garden — the fruit could be picked and preserved and given to people like [Queenstown support centre] Happiness House."

Botherway wouldn’t mind if the orchard was split into two sections, but says if Three Mayors Ridge is a precedent, it would be more like six or seven.

"We just don’t want it to happen again — I would fight it with everything."

Local councillor Heath Copland says he’s sympathetic to the neighbours, "given the precedent from Three Mayors Ridge", but doesn’t want to comment further as he’s on the Arrowtown Planning Advisory Group.

Local Ray White agent Michael Tierney, who is marketing Reidhaven, is adamant it can’t be intensively subdivided due to its historic zoning and need for a view shaft.

"I would never ever promote the property as being multiple subdivisible."

You can’t use Three Mayors Ridge as a precedent, he says — "one development doesn’t necessarily give the right for another because the conditions are different".

"The people we have got interested in this site are there to love it to bits and to create a wonderful residential home out of it."