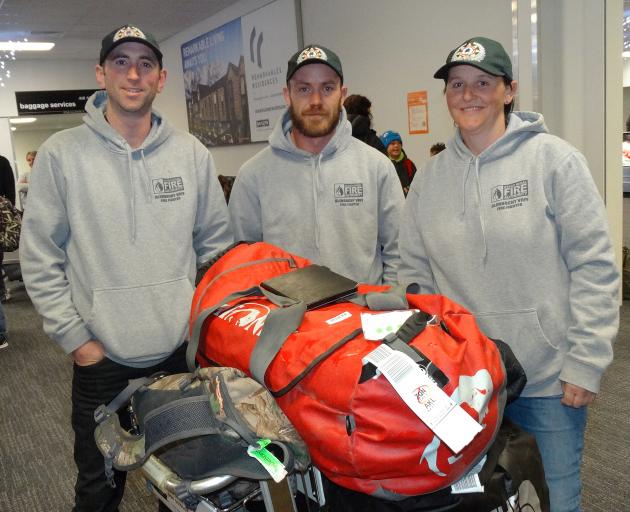 Glenorchy firefighters (from left) Will McBeth, Ben Douglas and Sonya Poplawski at Queenstown Airport on Sunday. PHOTO: DAVID WILLIAMS
Imagine fighting a fire bigger than Stewart Island - and it is just one of 207 wildfires burning across a vast, charred landscape.

That is what a group of five Otago firefighters have just been facing in Canada.

Mr McBeth told the Otago Daily Times they endured long days in British Columbia - ``sleeping in tents for a month, on camping mattresses, working 14-hour days at a time, 14 days in a row''.

Ms Poplawski said working in those conditions was a ``real mind game'' - ``you've got to get your mind in the right place''.

So what was it like coming back to snow in Queenstown on Sunday?

``We've gone from anywhere between 20degC to 40degC back to this.''

The Otago five were part of a South Island team of 20 firefighters tackling the Elephant Hill blaze in British Columbia, which is having its worst fire season on record.

Thousands of people have been evacuated and a state of emergency remains in place.

The Elephant Hill fire covers 1930sq km, and is being fought by more than 450 firefighters and 15 helicopters, stationed in two camps.

Mr McBeth said at no point was their team in danger.

``The systems are set up so that safety was paramount.''

The 28 days of firefighting were varied, he said, including front-line firefighting, mopping up work and blacking out areas.

``When we first got there there was a lot going on and the fire grew considerably while we were there.

``We left it with more than 50% contained at that point, so it was starting to turn.''

Ms Poplawski said: ``But, of course, with the weather so variable, you still get very hot days and the bad wind directions for the fires. ... it's a really hard one to battle.''

Despite the trying circumstances, Mr McBeth and Ms Poplawski said the experience was ``awesome'' and the Canadians ``lovely''.

Ms Poplawski said the 20-strong team from Otago, Southland, Canterbury and Nelson had a great time together.

``It was a really good bunch of guys. It was really different working as a 20-pack but it's something that worked.''

Back in Canada the firefighting continues.

Mr McBeth said, ``We leave behind Australian crews, Mexican crews, crews from all across Canada and the United States, and they're continuing to work to try and get the fires contained.

``They have quite a challenge ahead of them.''