Frustrated by inaction on leaks 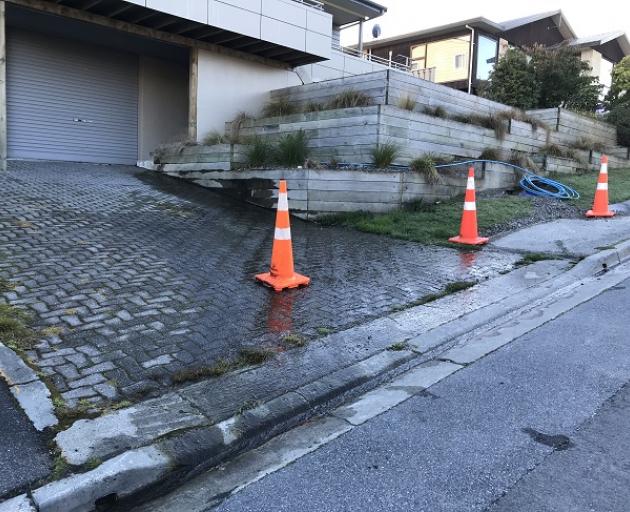 Residents on Veint Crescent are battling with the council to fix major water leaks at two properties and an overflowing road drain. Photo: Scene
A Queenstown homeowner’s losing patience with the council over an underground water leak, which has been getting progressively worse for months.

Simon Robertshawe, who’s owned a property on Veint Crescent – off Frankton Road and Suburb Street – for about eight years, says his tenant contacted council about water coming from under the front driveway in mid-February.

Veolia – council’s water contractor – sent a letter back advising it was a “private issue” because the leak’s coming “from quite far up the driveway”.

But a plumber’s inspected it and reckons the problem is a council water pipe.

The water volume’s “tripled” over the last few months, Robertshawe says, and there’s now a deluge down the driveway, spilling on to the footpath.

Water’s also coming from the front of a neighbouring property and from a road drain on Suburb St, metres from houses.

Other residents have also contacted the council, and Robertshawe says his tenant’s been trying to get council staff to take action, but they’ve been slow in detecting the leak and communicating what’s going on.

Robertshawe remembers a similar situation in the street six years ago when it took the council “many months” to find and fix a leaking council pipe.

He’s concerned about how much water’s been wasted and says with winter on the way, it needs to be sorted soon.

“I can see a calamity happening, whether it be someone’s safety or my house giving way because the wood fence is already shifting and expanding.”

In a written statement, council communications adviser Campbell Weal says contractors have been in regular contact with residents, and the council shares concerns about water leaking on public footpaths, particularly in winter.

He says council contractors have visited the property several times and maintain the problem’s stemming from a private leak at the neighbour’s property. Residents have been advised to contact a plumber.