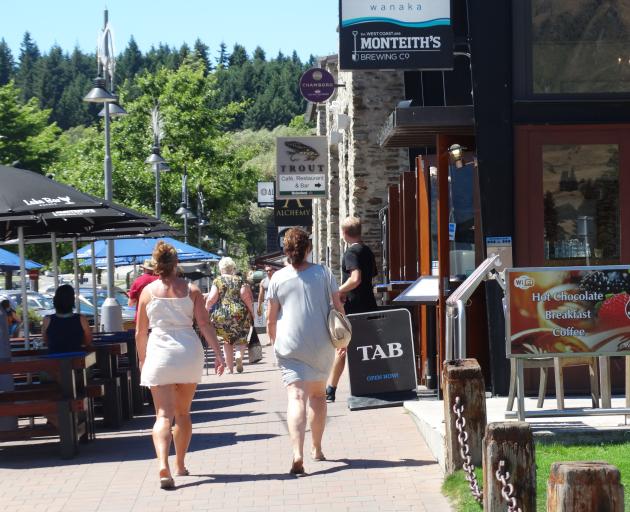 Despite the hot summer sun few are wearing hats or sunscreen. Photo: Kerrie Waterworth
New Zealand has the highest rate of melanoma in the world, and very high rates of non-melanoma skin cancer. With the country having experienced its hottest January on record there are calls for the Government to do more to protect the public from the dangers of sunburn and UV radiation from the sun. Kerrie Waterworth reports.

Beautiful vistas, stunning lakes and an easy, relaxed, outdoorsy lifestyle have made Queenstown, Wanaka and Central Otago three of the most popular places in New Zealand to retire.

Nearly every day you can see baby-boomers playing sports like golf, tennis, bowls, skiing or mountain biking and you can also see many of them sporting bandages on their skin.

This was the generation who grew up thinking lots of sunshine was good for you as it allowed young bodies to make vitamin D which helped absorb calcium and strengthen bones. As teenagers and young adults they lay in the sun for hours trying to get that all-over tan.

Dr Julian Pettit is one of four GPs in the Wanaka Medical Centre who have trained with the Skin Cancer College of Australasia.

"Unfortunately, sun damage from exposure to UV radiation is cumulative and the damage that is done in your late teens and early adult years is what really affects the rest of your life.

"A lot of our work is doing biopsies and cutting skin cancers out of people over the age of 50 when people didn’t know about the danger of sun damage and didn’t have access to sunscreens. You see older people walking round Wanaka and every so often they have a new piece of tape on their face."

Dr Pettit is hopeful the slip, slop, slap promotion that was around from the 1990s will result in a drop in the number of skin cancers in those over the age of 50 in the coming decades, but Skin Institute Queenstown director Dr Hans Raetz is not so sure.

Skin Institute Queenstown director Dr Hans Raetz says the reason New Zealanders have more skin cancers than the rest of the world is because of our ‘‘wilful ignorance’’ of sun damage. Photo: Michael Thomas
"I’ll believe it when I see it. The problem is you have a more outdoorsy lifestyle nowadays; people  want to stay more active and are therefore spending more time outside.

"There is a reason why we have more skin cancers than the rest of the world and to some degree it is because of our non-awareness of sun damage. Actually wilful ignorance is probably a better word; it is an extra complication in your life and you don’t want to know about it."

In 2017 the Skin Institute surveyed 2500 New Zealanders and found only 11% of men put on sunscreen every day despite the fact that melanoma is the most common cancer in men aged between 25 and 44, and 77% of all respondents said they did not know how to recognise an abnormal mole which is a sign of a potential skin cancer.

"There is a downplaying of the seriousness of skin cancer in this country, there is no question about it. The numbers are horrendous. 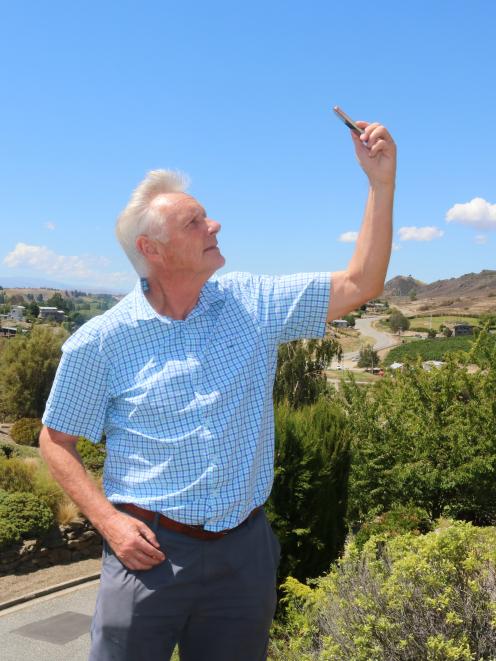 Richard McKenzie tests the uv2Day app in the hot Alexandra sun. Photo: Tom Kitchin
Dunedin oncologist and Cancer Society medical director Dr Chris Jackson said there are no studies which show having a population-based screening for skin cancer has an impact on skin cancer rates, or reduces death rates from skin cancer, but having your suspicious or worrying spots checked by your doctor and taken off if necessary was important as, the smaller the cancers were, the more likely they were to be cured.

The Cancer Society runs the Sun Smart schools programme aimed at improving sun smart behaviour in primary school children. Dr Jackson said the uptake of the programme around the country varied and was about 30 to 35%. The society did not yet have the infrastructure to extend the programme into secondary schools.

There was very limited government input into sun smart education, particularly for outdoor workers, and the Cancer Society would like to see it do much more.

"The Government needs to take responsibility for its workers and recognise UV exposure as an occupational hazard and that UV exposure is a hazard for our kids at school, too, particularly on outdoor sports days where under 5% of schools have shading."

The Cancer Society does not receive any government funding for its SunSmart schools programme or any of its other activities. The Government does not provide funding for shading in existing schools but does provide funding for shade in new schools. The Health Promotion Agency (HPA) is funded by the Ministry of Health to promote skin cancer prevention. HPA corporate communications manager Lynne Walsh confirmed the current budget, including staff salaries, was $600,000 per annum.

The cost of treating skin cancers per year is estimated at $57 million. Dr Jackson said there were more  treatments available than before to treat skin cancer, but "an ounce of prevention is worth a pound of cure and we really do need to take more primary prevention to protect us from getting skin cancers in the first place.

"If we all put suntan screen on as regularly as we clean our teeth that would be a great start. If you are missing a bit of hair make sure you wear a hat, wear long-sleeved shirts, if you’ve got UV glasses put them on as well, slip, slop, slap, and actually avoid the sun rather than seek it. This is what  will turn the bus around in terms of our skin cancer rates."

The Cancer Society has started promoting a free SmartApp uv2Day which shows the current UV index, its peak value, and its progression throughout the day at locations all over New Zealand. Sun protection is recommended from September to April when the UV index is three or above, even on cooler, cloudy days.

Atmospheric physicist and emeritus scientist at the Niwa research station at Lauder in Central Otago Dr Richard McKenzie came up with the concept.

"It is really hard to know what the UV is. We’ve got no sensors on our body; the only sensor we have is sunburn perhaps 24 hours after the event.

"So, if you want to know what the UV is you have got to be told because it depends on a lot of factors, such as the how high the sun is in the sky, how much ozone there is, how much reflection from snow and cloud cover and how clean the atmosphere is."

At any time of day and at any location in New Zealand the free app can tell you what the UV would be, what the UV index is and how long you can stay in the sun before skin damage occurs.

Dr Haetz believes the app is a good idea because "anything that raises awareness that you are going to get sunburned if you hang around the open without a sunscreen is good for me".

Dr Jackson believes the app is a good tool but there needs to be more done.

Councils and government need to make sure there is adequate shading in their public spaces so that people are not exposed to unnecessary sun or at least can take refuge from the sun, he said.

"As individuals we need to be smarter in our sun exposure. We need to recognise the sun is killing us and we have to take steps to reduce the harm.

"We know what causes skin cancer; it is preventable but it will require a change in our behaviour and environment in order for us to reduce our high rates of skin cancer."